From A Wiki of Ice and Fire
(Redirected from Castle Stokeworth)
Jump to: navigation, search 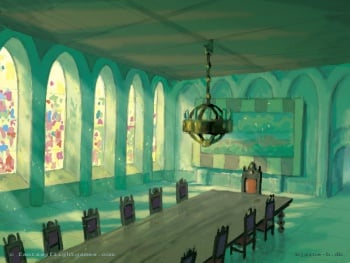 Stokeworth, also known as Castle Stokeworth,[1] is the seat of House Stokeworth in the crownlands. It lies north of King's Landing,[2] and south of Duskendale.[3] The maester at Stokeworth is Frenken.[1]

House Stokeworth surrendered their castle during Aegon's Conquest after Visenya Targaryen burned its roofs with Vhagar.[4]

Lord Stokeworth fled back to his castle after the death of King Maegor I Targaryen in the Red Keep.[5] King Jaehaerys I Targaryen began his first progress in 51 AC with visits to Stokeworth, Rosby, and Duskendale.[3]

During the Dance of the Dragons, Queen Rhaenyra Targaryen ordered the execution of Lord Stokeworth for repeatedly changing his loyalty between herself and her rival, King Aegon II Targaryen. Prince Daemon Targaryen suggested marrying Lord Stokeworth's daughter to Ulf White, but Rhaenyra decided to award the inheritance to Lord Stokeworth's son.[6] When Rhaenyra fled the capital after the Storming of the Dragonpit, she was allowed to stay at Stokeworth for one night by the castle's castellan.[7] Lord Borros Baratheon forced Stokeworth to submit after Aegon II regained the Iron Throne. Stokeworth levies joined Borros's host, but they abandoned him during the Battle of the Kingsroad.[8] Stokeworth raised the banner of Aegon III Targaryen after the death of Aegon II.[9]

Stokeworth is among the castles which receive letters from Stannis Baratheon.[1]

Together with Rosby, the lands of Stokeworth supply half of the food to King's Landing during the War of the Five Kings.[2] Falyse Stokeworth arrives at the capital with a small troop from Stokeworth.[10]

Queen Regent Cersei Lannister convinces Falyse and her husband, Ser Balman Byrch, to arrange Bronn's death.[13] After killing Balman in a duel, Bronn threatens to give Falyse to Stokeworth's garrison. She flees to King's Landing and asks Cersei for aid in retaking Stokeworth, but the queen instead sends Falyse to Qyburn in the black cells.[14] When Lady Tanda Stokeworth dies from a chill, her daughter Lollys becomes Lady Stokeworth with Bronn as her lord.[15]

Bronn: I am expected at Castle Stokeworth for supper.
Tyrion: Stokeworth? And pray, what is there for you in Stokeworth?
Bronn: A bride. I'm to wed Lollys the day after next.[11]