On his march south, Robb Stark takes the habits of riding in front of the column and asks a different lord to march with him each day. Quickly an informal personal guard of nobles is formed around Robb. In order to surprise the Lannister forces besieging Riverrun, Robb decides to divide his forces at the Twins. It takes hours for his army (~ 6,000 men) to cross the Green Fork in a double column formation.[20]

On the march from Riverrun to the Twins, Robb Stark takes thirty-five hundred men with him. He replaces Ser Brynden Tully by Lord Galbart Glover as the commander of his scouts, and the Greatjon is given commands of the van. The baggage train follows the main column under the supervision of Ser Wendel Manderly and his White Harbor knights, and at the end of the column, Robin Flint commands the rearguard.[7] 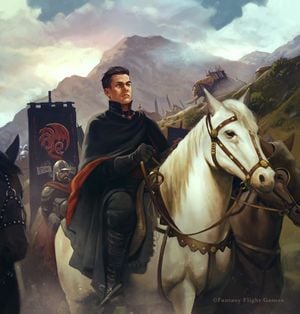