From A Wiki of Ice and Fire
(Redirected from Eastern continent)
Jump to: navigation, search 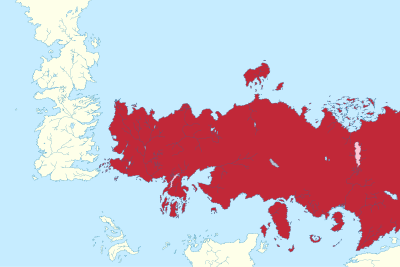 Location of Essos in the known world

Essos, often simply called the east, is the largest of the four known continents in the world. It lies east of Westeros and north of Sothoryos and Ulthos, stretching from the Shivering Sea in the north to the Summer Sea in the south, and from the narrow sea in the west to the lands surrounding the Jade Sea in the east, if not farther. Essos is populated by many different peoples and has a vast and varied geography.

In the novels of A Song of Ice and Fire, the continent is simply called the eastern continent, beyond the narrow sea, or the east; George R. R. Martin first referred to it as Essos in mid-2008 in an interview,[1] and later officially confirmed it. The Appendix of A Dance with Dragons officially refers to the continent east of the narrow sea as Essos. 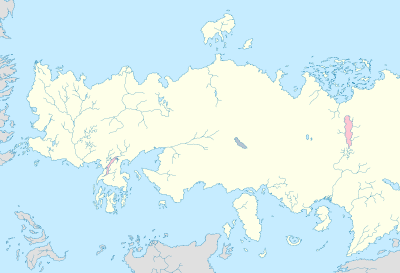 Essos is considerably larger than Westeros, though its true extent is unknown as no map of the entire continent currently exists. The north coast of the mainland is separated from the polar cap by the Shivering Sea. To the south, across the Summer Sea, lies the uncharted continent of Sothoryos. In the extreme east, across the Jade Sea, sit Asshai, Yi Ti, and the mysterious region called the Shadow Lands. South of the Shadow Lands is the continent of Ulthos.[2][3]

The geography and climate of Essos varies greatly. Being separated from the polar cap of the Land of Always Winter and located farther to the south, it is affected by winters to a lesser extent then Westeros.[4]

The western coastline appears to be temperate in the north, becoming drier and hotter to the south, and is characterized by green rolling hills, the massive Forest of Qohor, and extensive island chains such as Braavos and Lys. The middle of the continent is covered by the flat grasslands plains of the Dothraki sea and, to the east, the arid wasteland of red sand known as the red waste, where nothing grows. Beyond this desert, the city of Qarth sits beside the Jade Gates that lead to the Jade Sea. The south is dominated by dry rolling hills and has a Mediterranean climate with a coastline along the Summer Sea connecting Volantis with the Valyria peninsula and the great inlet known as Slaver's Bay. Essos is dominated by the Bone Mountains and the Krazaaj Zasqa, longitudinal mountain ranges separating the western half more familiar to the Westerosi and an exotic eastern half of which less is known.[2][3]

Essos is divided into several regions, each of which are home to distinct cultural groups.

Main article: Free Cities
See also: Map of the Free Cities from A Dance with Dragons

The Free Cities are nine independent city-states located on the western coast of Essos. Seven of the cities are coastal (Braavos, Myr, Pentos and Volantis) or island ports (Lorath, Lys and Tyrosh), lying on the narrow sea, whilst two others (Norvos and Qohor) are located inland. Except for Braavos, which was founded by refugee slaves, these cities are former colonies of the destroyed Valyrian Freehold; as such they retain elements of its culture. They are more developed and mercantile than the cities of Westeros, even King's Landing. Each of the Free Cities controls a certain amount of territory surrounding it, including smaller towns and villages. The region of the Free Cities extends from the western coastline to the Forest of Qohor and the mighty River Rhoyne in the east, which separate them from the Dothraki sea and the Kingdom of Sarnor.

In the northwestern corner of this region, between Braavos and Pentos, are the hills of Andalos, the ancient homeland of the Andals and, according to legends, the source of the Faith of the Seven.

East of the Forest of Qohor and north of the Dothraki sea are the grasslands of the Kingdom of Sarnor, which are watered by the great River Sarne and its tributaries. Most of the kingdom has been left in ruins by the Dothraki.[5]

East of the Free Cities and Sarnor, the vast grassland plain known as the Dothraki sea covers much of inland Essos. It is inhabited by the Dothraki people, a copper-skinned race of warlike nomads with their own language and unique equestrian culture. While the Dothraki do not trade, their slave raids are a driving force of Essos's economy. There are numerous ruined cities of older cultures in and near the Dothraki sea.

North of the Dothraki sea along the shores of the Shivering Sea are the Kingdom of Sarnor, Omber, and the forested Kingdom of the Ifequevron. North of mainland Essos are the islands of Ibben.[2][6]

The Valyrian peninsula is a large headland extending south from Essos into the Summer Sea. Once the heartland of the Valyrian Freehold and the location of the city of Valyria, it was partially destroyed in the Doom of Valyria, during which many islands formed, low-lying areas flooded, and Valyria fell into ruin. The peninsula and the Smoking Sea that surround its remnants are considered to be demon-haunted and rife with poisonous fumes; with few exceptions, those who travel there seeking the ruins of Valyria or its treasures never return.

South of the Dothraki sea, east of Valyria, and west of Lhazar are Slaver's Bay and Ghiscar. The region holds many small city-states and the three great slaver port cities of Yunkai, Meereen, and Astapor. The cities were built from the rubble of Old Ghis and the Ghiscari Empire, an ancient rival of the Valyrian Freehold which crushed and superseded it thousands of years ago. The slaver cities are still connected to the Free Cities by the Valyrian road network. The city of New Ghis sits on an island south of Ghiscar, but the novels reveal little about it. The Skahazadhan is the largest river of the region.

Lhazar is located southeast of the Dothraki sea and northeast of Slaver's Bay. It is a semi-arid land of pastures and hills. The horselords consider the Lhazareen, its shepherding people, easy targets and good slaves, calling them haesh rakhi ("Lamb Men").

Qarth is an ancient city in the distant east, beyond the red waste, on the shores of the Jade Sea. It is home to warlocks and merchant princes. Its position at the Jade Gates makes it the gateway of commerce and culture between the east and west (such as the Free Cities and Slaver's Bay), and more eastern lands (such as Asshai, the Shadow Lands, and Yi Ti). Brimming with wealth, and priding themselves on their sophistication, the Qartheen engage in unending intrigue between the many powerful factions of their society.

South of Qarth is the large island Great Moraq, located between the Summer Sea and the Jade Sea.[2]

Little is known of the lands of Essos found east of the Bone Mountains and the Krazaaj Zasqa. The southern lands along the Jade Sea include Yi Ti, Asshai, and the Shadow Lands. North of Yi Ti are trading cities encircling the Great Sand Sea, as well as the Plains of the Jogos Nhai. Farther east are even more exotic lands - the Thousand Islands in the Shivering Sea, Mossovy, the Grey Waste, the Land of the Shrykes, the Mountains of the Morn, the Cities of the Bloodless Men, the Hidden Sea with Carcosa and the City of the Winged Men, the Five Forts, etc.[3]

Essos is home to a much larger and more diverse set of races and cultures than Westeros. They are descendants of old cultures ranging from the Andals, the Rhoynar, old Ghis, and Valyrian Freehold. Unlike Westeros, which is unified under the Seven Kingdoms, Essos is divided into many different sovereign regions and city-states and has had no dominant power since the Valyrian Freehold fell almost four centuries ago. Its peoples include:

Vanquished or vanished cultures include the Jhogwin, the Mazemakers, and the Ifequevron. The Rhoynar largely fled the Rhoyne for Dorne in Westeros.

Essos, the vast continent across the narrow sea, teems with strange, exotic, and ancient civilizations, some still extant and striving, others long fallen and lost to legend.[7]

He lifted his eyes and saw clear across the narrow sea, to the Free Cities and the green Dothraki sea and beyond, to Vaes Dothrak under its mountain, to the fabled lands of the Jade Sea, to Asshai by the Shadow, where dragons stirred beneath the sunrise.[8]

Tyrion: In Westeros, the word of a Lannister is considered good as gold.
Tybero: This is not Westeros. On this side of the narrow sea, we put our promises on paper. Debts written on the wind tend to be ... forgotten, shall we say?[9]