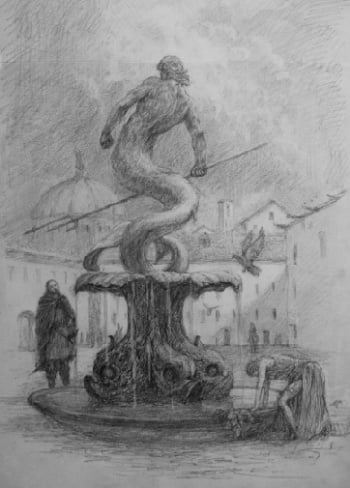 Fishfoot Yard is a cobbled square in White Harbor located just inside the Seal Gate with a fountain at its center. The Old Mint is located at Fishfoot Yard.[1]

A stone merman rises from the fountain's waters, twenty feet tall from tail to crown. The impressive statue is called "Old Fishfoot" by the locals. His curly beard is green and white with lichen and one of the prongs of his trident broke long ago.[1]

Down past where Old Fishfoot's trident points is an alley where tasty fried cod is sold. There is also a safe brothel nearby. Off the other way, there was a brewhouse which made a black beer whose casks could fetch as much as Arbor gold in Braavos and the Port of Ibben. Across the yard and down a flight of steps is a winesink called the Lazy Eel. Oil lamps light the yard at night.[1]

When Davos Seaworth arrives at White Harbor, he visits Fishfoot Yard in the afternoon and finds the square teeming with people. A woman is washing her smallclothes in Fishfoot’s fountain and hanging them off his trident to dry. A young girl is selling cups of fresh milk from her nanny goat. Beneath the arches of the peddler's colonnade, Davos sees scribes, moneychangers, a hedge wizard, a herb women, and a bad juggler. A man is selling apples from a barrow, and a women is offering herring with chopped onions. Chickens and children are underfoot. Davos sees hundred of people within the Old Mint.[1]

Davos stops beneath the colonnade and trades a halfpenny for an apple and chats with the apple seller to try and catch up with tidings in White Harbor. Afterwards he makes his way to the Lazy Eel.[1]

The square was named for some dead lord, but no one ever called it anything but Fishfoot Yard.[1]