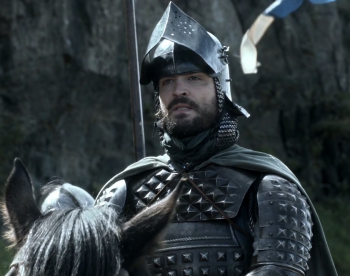 Ser Vardis Egen, captain of the guard, in Game of Thrones

House Arryn guards are guardsmen in the service of House Arryn at the Gates of the Moon and the Eyrie. They wear sky-blue cloaks[1][2][3] and silver mail[4] and wield spears.[2]

Catelyn Stark sees a guard in a sky-blue cloak after arriving at the Gates of the Moon with her captive, Tyrion Lannister.[5] Ser Vardis Egen, long the captain of the guard for the late Lord Jon Arryn,[1] greets Catelyn when she ascends to the Eyrie.[5] Lord Robert Arryn orders his guards to have Tyrion thrown through the Moon Door, but Catelyn intervenes to save her prisoner.[1] Vardis is killed by the sellsword Bronn in Tyrion's trial by battle.[6]

After arriving at the Eyrie, Lord Petyr Baelish replaces Marwyn[3] with his own man, Ser Lothor Brune.[2]

The bard Marillion tells two guards that they are not to enter the High Hall when he brings Sansa Stark before Lady Lysa Arryn, and he bars the doors behind them. Petyr pushes Lysa through the Moon Door, however, and places blame on Marillion before allowing Sansa to let the guards in.[2]

The guards of Lord Robert believes that Ser Lyn Corbray is the most dangerous of the Lords Declarant.[4]