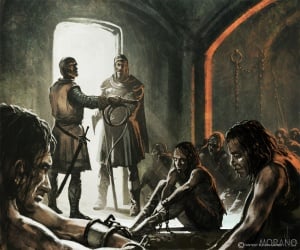 House Bolton guards are guardsmen in the service of House Bolton. Steelshanks Walton is the captain of Roose Bolton, Lord of the Dreadfort.[1] 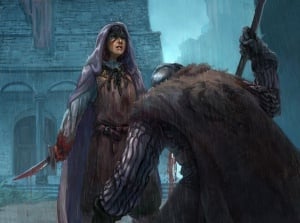 After learning that Lord Roose Bolton plans to leave her with Vargo Hoat when he departs Harrenhal, Arya Stark kills a tall, thin Bolton guard at one of the castle's postern gates when she escapes with Gendry and Hot Pie.[2]

According to Lady Donella Hornwood, Roose's bastard, Ramsay Snow, is massing men at the Dreadfort.[4] Ramsay later brings six hundred men, whom he calls his father's garrison, to Winterfell, where they betray the host of northmen assembled by Ser Rodrik Cassel.[5]

When Lord Bolton hosts Ser Jaime Lannister and Brienne of Tarth at Harrenhal, the castle's Hall of a Hundred Hearths is guarded by a dozen spearmen. Roose tasks Steelshanks Walton with escorting Jaime to King's Landing.[6] "Arya Stark" is later escorted by Walton and his men from King's Landing to Lord Bolton at the Twins.[7]

Sandor Clegane brings Arya Stark to the Twins during the wedding of Lord Edmure Tully to Roslin Frey. Outside the castles, they are stopped by a Bolton sergeant who is more wary than Ser Donnel Haigh.[8]

Walton commands Roose's guards while in Barrowton[1] and Winterfell.[11] Bolton spearmen are forced to intervene when Freys clash with Manderlys.[11]

She might have been able to trick a Frey or one of the Brave Companions, but the Dreadfort men had served Roose Bolton their whole life, and they knew him better than she did. If I tell him I am Arya Stark and command him to stand aside ... No, she dare not. He was a northman, but not a Winterfell man. He belonged to Roose Bolton.[2]