Jet is a dark gemstone created through the high-pressure decomposition of wood. 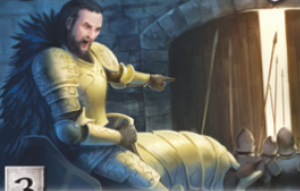 The broken wheel of House Waynwood is picked out in beads of jet on the green mantle of Lady Anya Waynwood.[3]

Bran Stark has a wolf's-head brooch of silver and polished jet.[4] One of the brooches of Ser Brynden Tully is a black fish wrought in jet and gold.[5]

Illyrio Mopatis has jet among his various rings.[6]

Some Westerosi compare the dark skin of Summer Islanders like Alayaya,[13] Quhuru Mo,[14] and Kojja Mo[15] to polished jet.

Jet and jade were among the goods on the Treasure when it reached Pentos after a voyage to the Jade Sea.[16]

Renly Baratheon wears a cloth-of-gold cape with the black stag of House Baratheon picked out in flakes of jet.[17]

Victarion Greyjoy thinks of the skin of Moqorro as even blacker than jet.[18]