Mormont's raven is a pet raven of Jeor Mormont, Lord Commander of the Night's Watch. He can speak, usually repeating a one syllable word twice. Typically it is a word just said by one of the people around, but it is often uncannily appropriate.

Mormont's raven has beady black eyes[1] and big black wings.[2] Jon Snow describes it as an "old raven", though its exact age remains unknown.[3][N 1] At some point it is described as a "huge raven".[4] It seems to be rather large for its species.[5]

This raven is particularly fond of fruit and corn, eating kernels out of Mormont's hand. Maester Aemon considers this a rather rare trait, since most ravens prefer meat.[3] The raven is usually scruffy in appearance. Jon Snow considers it bold and fearless. He also considers it clever, too clever.[5]

Mormont's raven served as the companion of Jeor Mormont for "long years".[5] 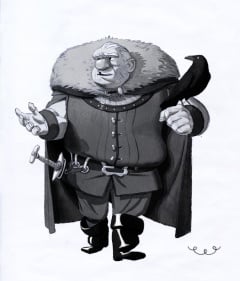 Jeor Mormont with his raven, by Wouter Bruneel.

At Castle Black, Alliser Thorne orders recent recruit Jon Snow to report to Lord Commander Jeor Mormont. Jon first notices the raven perched on the arm of Jeor. Mormont gives Jon a letter that has arrived from Winterfell for him. The message was written by Robb Stark, informing Jon that Bran Stark has recovered from a coma. Though the boy is crippled, Jon is happy that his brother is going to live. The raven flies to the shoulder of Jeor, while repeating the last word of Jon: Live![6]

During a meal, Alliser Thorne and visitor Tyrion Lannister insult each other. Bystanders laugh, while the raven caws loudly from above a window, repeating the last word of Tyrion: Duel![1] Tyrion finds the bird annoying and privately considers throttling it. He decides against it, not wanting to insult Jeor.[1]

Later, Jon is forced to fight a wight. Jon improvises and uses Jeor's oil lamp to start a fire. The raven starts cawing Burn, seemingly on its own initiative.[7]

After Jon attempts to desert to avenge his late father, Jeor asks whether Jon finds the war of Robb Stark to be more important than their own war. The raven flaps its wings and starts repeating: War. Jon finds the words to be song-like. Jeor suggests that Eddard Stark himself sent Jon to the Wall, though nobody truly knows why. The raven repeats the question: Why?[8]

Lord Commander Mormont brings his raven with him while commanding the Great Ranging. It continues to repeat various words of those having conversations with Mormont.[9] 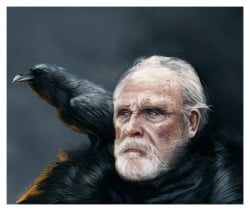 Chett and others on the ranging plan to mutiny and murder Jeor Mormont. The simple Small Paul is convinced to assist once he is told he can have Mormont's raven afterwards.[10]

Mormont's raven survives the Battle of the Fist of the First Men, and manages to accompany his master to Craster's Keep.[11] After Mormont is murdered during the mutiny, the raven asks Samwell Tarly for corn. It seems to encourage Sam to leave quickly with Gilly to escape the approaching Others and their wights, but is not seen after Sam leaves Craster's Keep.[11]

Later, at Castle Black, the elections for the position of Lord Commander of the Night's Watch are ongoing. No candidate has enough votes to secure election, and a new vote is taken. A large kettle, used as the ballot box, is brought to the hall's table by Samwell Tarly and Clydas. When Clydas takes off the lid of the kettle, a raven bursts out from inside. It then flies three times around the room finally it landing on the table, next to the place where Jon Snow is seated. It starts repeating the name: Snow. It then spreads its wings and flies to Jon, perching on his shoulder.[4]

Samwell says he recognizes the bird, proclaiming it to be Mormont's raven. Alliser Thorne laughs, claiming that Samwell is trying to fool them. He is certain that this is one of several ravens which Tarly has trained to say Snow, while Mormont's raven had a richer vocabulary. The raven looks at Jon and asks for corn. It soon changes its tune, repeating a new word: Kettle? This act helps convince the men that this is indeed Mormont's raven, and helps decide the election in favor of Jon. Samwell insists that he had nothing to do with the raven's appearance, claiming that it even scared him.[4] 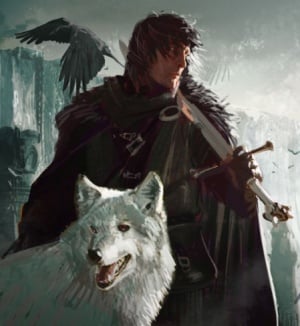 The raven dwells with new Lord Commander Jon Snow in his quarters, and continues to repeat certain words from ongoing conversations.[12]

Jon has a dream where he defends the Wall, facing the Others and their wights. He faces various people from his past.[13] The dream continues with a "gnarled hand" roughly seizing his shoulder. Jon turns to face the owner of the hand and there the dream ends. He finds himself in bed with Mormont's raven pecking at his chest. It calls him Snow. As Jon dresses, the raven keeps some distance from him and mutters from the other side of the room. He recognizes some familiar words: Corn, King, Snow. Then the raven twice calls him by full name: Jon Snow. Jon finds this peculiar, as he cannot remember any previous instance of the raven using his full name.[13]