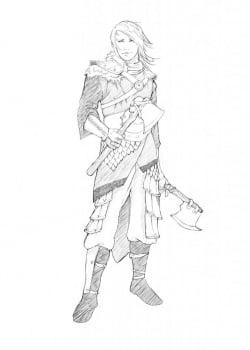 When Asha Greyjoy first met Qarl in 293 AC or 294 AC, she called his attempt at growing a beard "peach fuzz". Since he had never seen a peach, she encouraged him to join her crew. They traded at Fair Isle, Lannisport, and the Arbor,[2] and raided Lyseni pirates in the Stepstones.[5] Qarl and Asha began sleeping together after sampling peaches at the Arbor.[2]

Qarl and two companions, Skyte and Uller, encounter Theon and Asha Greyjoy in Lordsport. There they recount the story of the death of Skyte's brother, Eldiss. Asha tells Theon that he should make them part of his crew.[6]

Qarl and Tristifer Botley accompany Asha to her meeting with Stannis Baratheon, when she asks about the fate of her captive brother Theon Greyjoy. Theon considers Qarl and Tris to be Asha's pets.[10]