Shagga, known as Shagga son of Dolf because of his father,[1] is a member of the Stone Crows, one of the mountain clans that dwell in the Mountains of the Moon. In the television adaptation Game of Thrones he is played by Mark Lewis Jones.[2] 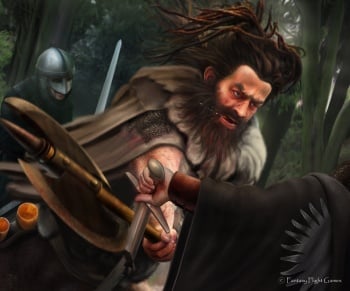 Shagga is a massive, hairy man dressed in skins.[3][4] He has a deep voice and a loud laugh,[3] as well as a fierce frown.[5] The unwashed Shagga has an overpowering stench.[1]

Shagga fights with a weapon in each hand.[3] He enjoys strong alcohol.[6]

After Tyrion Lannister wins his trial by combat in the Eyrie, Shagga is in Gunthor's band of Stone Crows that Tyrion encounters in the Mountains of the Moon. He wields a club in his right hand and an wood-axe in his left. Shagga and other Vale mountain clansmen agree to serve Tyrion for pay and equipment.[3][1]

When they arrive at the camp of Lord Tywin Lannister, Shagga is protective of his mare. When the captain of the guard attempts to block the clansmen from entering the crossroads inn, Shagga breaks the captain's sword over his knee and tosses the man against the hearth.[1] After Stone Crows kill one of the Moon Brothers, Shagga and Conn refuse to pay blood money demanded by Ulf son of Umar.[4]

Now wielding two steel battle-axes and wearing layers of mail and leather, Shagga fights in the battle on the Green Fork between the westermen under Lord Tywin Lannister and the northmen under Lord Roose Bolton. Shagga survives several arrows, but is saddened by the death of his friend, Conn.[4]

Shagga accompanies Tyrion to King's Landing as a guard for the acting Hand of the King. When Tyrion goes to interrogate Pycelle, Shagga hacks down the Grand Maester's door with three axe swings. Shagga is interested in the serving girl who had been with Pycelle, but the young girl is scared by the clansman. Tyrion has Shagga cut off the Grand Maester's beard to scare him.[5]

During the riot of King's Landing, Tyrion sends Shagga to protect Shae in a manse near the Iron Gate.[6]

Before the Battle of the Blackwater Shagga and the rest of the mountain clansmen who accompanied Tyrion to King's Landing are sent to the kingswood in order to raid and delay Stannis Baratheon's forces.[7]

After the Battle of the Blackwater, Shagga and his clansmen remain in the kingswood, preferring to stay in the forest instead of returning home to the Mountains of the Moon.[8]

Tyrion is accused of murdering Joffrey I Baratheon after the king dies at his wedding feast. During the trial, Shae claims that Tyrion had threatened to give her to Shagga and Timett before the battle on the Green Fork.[9]

Shagga is listed as a clan chief of the Stone Crows, leading a band in the kingswood.[10]

While attempting to join the Second Sons, Tyrion mentions Shagga and Timett as examples of men who have benefited from his generosity.[11]

Little boyman, will you mock my axe after I chop off your manhood and feed it to the goats?[3]

Shagga: A Stone Crow's axe is always sharp, and Shagga's axes are sharpest of all. Once I cut off a man's head, but he did not know it until he tried to brush his hair. Then it fell off.
Tyrion: Is that why you never brush yours?[5]


Timett: Shagga wants every whore in this city of whores.

Tyrion: I want night attacks, so many and so sudden that they'll be afraid to sleep—
Shagga: All this I learned from Dolf son of Holger before my beard had grown. This is the way of war in the Mountains of the Moon.[7]

Shagga son of Dolf is the one who looks like Casterly Rock with hair.[1]

Leo: I saw that great hairy one today, the one who insisted that he must have two battle-axes, the heavy black steel ones with twin crescent blades.


Tyrion: Shagga likes to kill with either hand.
Leo: He still had that wood-axe of his strapped to his back.


Tyrion: Shagga is of the opinion that three axes are even better than two.[4]
—Leo Lefford and Tyrion Lannister

Telling Shagga and Timett how to pillage is like telling a rooster how to crow, but I should prefer to keep them with me.[12]

Tyrion: Perhaps you should eat the goose and marry the maid. Or better still, send Shagga.
Bronn: Shagga's more like to eat the maid and marry the goose.[13]

Ben: Shagga, did you say? Is that a woman's name?
Tyrion: His teats are big enough. Next time we meet I'll peek beneath his breeches to be sure.[11]

Shagga article on the Game of Thrones wikia.