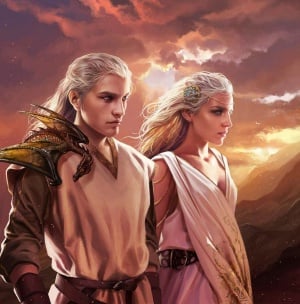 Dragonlords by Magali Villeneuve, from The World of Ice & Fire.

Valyrians are a race originating in Essos, in the eponymous Valyrian peninsula, known for their rare features of silver-gold hair and violet eyes.

Valyrians are famous for having silver-gold hair and violet-purple eyes, characteristics not found amongst any other peoples of the world. This can vary from white to silver-gold to blond hair, and from lilac, to deep purple, and pale blue eyes. The most noble of Valyrians were considered strikingly, some say inhumanly,[1] beautiful.[2] The species of lemur living in the Forest of Qohor sharing similar physical features is called Little Valyrian.[3]

Valyrians were originally a civilization of humble shepherds who discovered dragons in the Fourteen Flames, a ring of volcanoes on the Valyrian peninsula.[4] Valyrian stories claim that dragons originated in their lands, although tales from Asshai claim the beasts were brought to Valyria from the Shadow Lands.[5] The Valyrians tamed the dragons with magic—taught by a vanished people according to the Asshai'i[5]—and made the beasts into devastating weapons of war.[6] With the aid of dragons, the Valyrians established the Valyrian Freehold.[7]

Valyrians survive in Lys, where even the smallfolk have the pale skin, silver-gold hair, and purple, lilac, and pale blue eyes of the dragonlords of old,[8] as well as in Volantis, among the Old Blood, which traces its descent to the Freehold itself.[9][10] Other survivors are the members of House Targaryen, the sole surviving family of dragonlords, as well as those of Velaryon and Celtigar.

Due to the practice of the first night, Valyrian features were also passed unto the so-called dragonseeds.

Though unrelated to the Valyrians, the members of House Dayne, an ancient Westerosi noble house, also possess violet eyes.