From A Wiki of Ice and Fire
Jump to: navigation, search
"Ship" redirects here. For the playhouse, see Ship (playhouse). 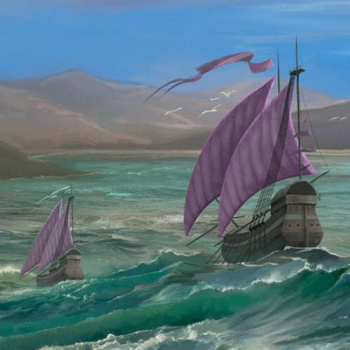 Watercraft in the known world range from small river and fishing boats, raider vessels, various warships and trade ships, up to the huge war dromonds and the magnificent swan ships that cross the Summer Sea.

Some of the descriptions are based on real world parallels. 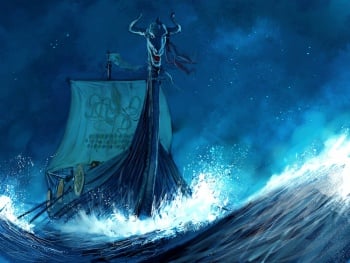 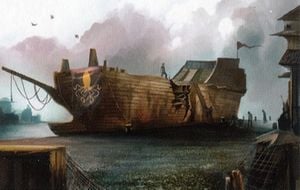 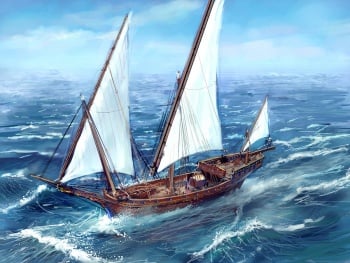 The major fleets of Westeros are the Iron Fleet and the fleets of the ironborn lords, based in the Iron Islands; the royal fleet, based at King's Landing and Dragonstone; and the Redwyne fleet, based at the Arbor.[29] The north has had no strength at sea since King in the North Brandon the Burner put Brandon the Shipwright's remaining ships to the torch hundreds of years ago.[30]

In the rest of the Seven Kingdoms, lords whose lands abut the coast might keep a war galley or three for coastal defense against pirates, but only major houses like the Lannisters have larger and grander fleets of twenty to thirty ships. Usually for major battles, the lords call the ships of their various bannermen.[29] Historically, the Velaryon fleet formed the bulk of the royal fleet.[31]

While the Greyjoys' main force is the Iron Fleet, they can also raise hundreds of ironborn ships. However, most of those will be longships made for raids rather than battle. Other Westerosi lords are more likely to have larger and more formidable ships like cogs, carracks, and war galleys of various sides, up to the great dromonds with scorpions and catapults on deck.[3]

The Tyrells are in more or less the same position as the Lannisters, though they depend even more on their bannermen, especially the lords of the Shield Islands off the mouth of the Mander. The Hightowers have only a few warships, but control Oldtown, home to numerous trading vessels.[29]

In Qarth in central Essos, the Thirteen control a thousand ships, the Ancient Guild of Spicers own about twelve hundred or thirteen hundred, and the Tourmaline Brotherhood has about eight hundred.[32]

In Braavos, the Sealord commands a fleet of warships second to none, and a mercantile fleet whose purple hulls and purple sails have become a common sight throughout the known world.[33] The Arsenal of Braavos can reportedly build a war galley in a day.[27] 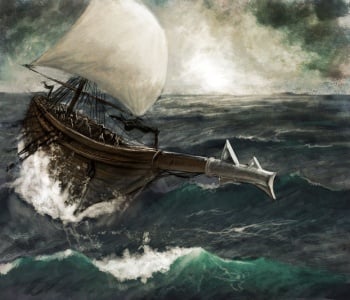 Ships are used in small skirmishes, raids, and full-scale naval engagements, such as the sea battle off Fair Isle. Lords whose lands abut the coast might need to maintain a few war galleys to defend against piracy. Ships are also use for support roles, such as providing provisions and transporting troops.

The basic tactic of naval battles is to get the ship close enough to ram the other ship, board her, and fight the rest of the battle on the deck. Up until they close, longbows and crossbows can be used. Sometimes siege weapons are carried on the largest war galleys. 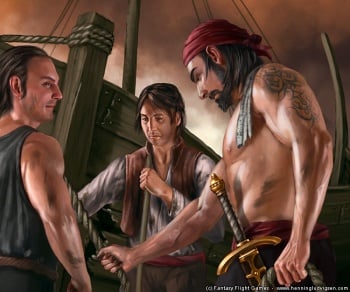 The royal fleet is divided between King Joffrey I Baratheon at King's Landing and Stannis Baratheon at Dragonstone. Both fleets are largely destroyed during the Battle of the Blackwater.[9]

Euron Greyjoy leads the Iron Fleet and ironborn lords in the taking of the Shields.[34]

The Redwyne fleet assists in the siege of Dragonstone.[38]

The Redwyne fleet sails back to defend the Reach from the ironborn.[41]

Davos Seaworth spots twenty-three war galleys at White Harbor,[15] while Wyman Manderly claims to have as many more hidden up the White Knife.[42]