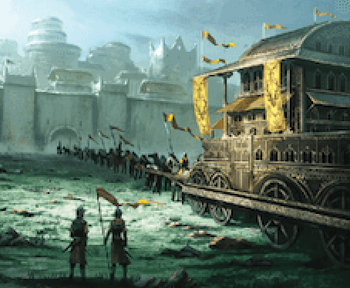 A wheelhouse, also called a carriage,[1][2] is a wheeled vehicle for the transport of persons. Wheelhouses are usually horse-drawn.

According to legend, Septon Mattheus's opulent wheelhouse passed Septon Barth, who was riding a donkey, at Bitterbridge in 50 AC.[3]

Princess Daella Targaryen travelled in a wheelhouse when she visited Raventree Hall with her mother, Queen Alysanne Targaryen, in 79 AC as she was afraid of horses.[4]

The Hand of the King, Lord Torrhen Manderly, organized a great royal progress to mark the coming of age of King Aegon III Targaryen. Among the preparations he ordered the royal wagons and wheelhouses to be repaired and repainted. Aegon cancelled the progress, however.[5]

Near the end of Robert's Rebellion, King Aerys II Targaryen sent his sister-wife, Queen Rhaella Targaryen, and their son, Viserys, to Dragonstone for their safety. Ser Jaime Lannister of the Kingsguard saw the queen climbing inside the royal wheelhouse that take her down Aegon's High Hill to the docks.[6] 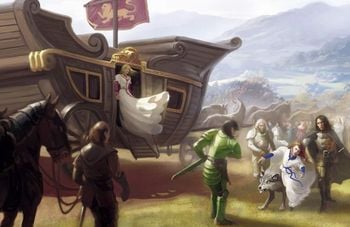 Queen Cersei Lannister and her children accompany King Robert I Baratheon from King's Landing to Winterfell. The queen travels in a huge windowless[7] double-decked carriage of oiled oak and gilded metal pulled by forty heavy draft horses.[1] While Prince Joffrey Baratheon rides a horse alongside his father, the younger Princess Myrcella and Prince Tommen stay in the wheelhouse with their mother.[1] Robert drunkenly sleeps in the wheelhouse's bed each night, which frustrates Cersei's brother, Ser Jaime Lannister of the Kingsguard.[8]

The carriage is too wide to pass through Winterfell's gates.[1] Robert later complains about the wheelhouse to his friend, Lord Eddard Stark, judging it to be too slow and unpractical for such a long journey.[9]

On the journey back to the capital, Eddard's daughters, Sansa and Arya, are invited to ride in the royal wheelhouse with Cersei and Myrcella. Sansa is delighted but her sister does not care.[7] After the direwolf incident at Darry, Robert does not wish to face Eddard and spends the remaining fortnight of the journey drunk in Cersei's wheelhouse.[10]

After Eddard's arrest, Arya spies red cloaks searching for her in wagons and carriages at the King's Gate.[2]

Lady Olenna Tyrell comes to King's Landing to attend the wedding of her granddaughter, Margaery Tyrell, to King Joffrey I Baratheon. Olenna and her good-daughter, Lady Alerie Hightower, arrive in a wheelhouse decorated with gilded carvings of roses.[11]

According to Taena of Myr, Olenna keeps a large chest of gold coins from before Aegon's Conquest in her wheelhouse.[6]

That damnable wheelhouse, the way it creaks and groans, climbing every bump in the road as if it were a mountain … I promise you, if that wretched thing breaks another axle, I'm going to burn it, and Cersei can walk![1]