Difference between revisions of "Aemon Targaryen (son of Viserys II)"

Prince Aemon Targaryen, also known as the Dragonknight, was the second son of King Viserys II Targaryen and his wife, Lady Larra Rogare. Aemon joined the Kingsguard during the reign of his uncle, King Aegon III Targaryen, at he age of seventeen,[3] and eventually rose to become Lord Commander. After Aegon III, Aemon served four other kings. He died saving the life of his brother, King Aegon IV Targaryen.

As an infant, Aemon was large, lust and strong, and just as beautiful as his brother Aegon was.[1][4]

Aemon possessed some piety, making him more alike to his younger sister Naerys than to his older brother Aegon.[1] He became a great jouster and swordsman later in life. It is said that Cregan Stark considered Aemon to have been the best swordsman he ever faced.[5] He is considered by some to have been the noblest knight to have ever lived.[1]

Aemon was born to Prince Viserys Targaryen and Lady Larra Rogare on eve of Smith's Day in 136 AC. A dragon's egg was placed in his cradle.[4] All rejoiced at his birth, except his older brother Aegon, who was found by their mother hitting the newborn Aemon with Aemon's egg.[4]

Aemon was inseparable from his sister Naerys when they were young.[6] Stories speak of Aemon's doomed love for his sister.[7] Aemon and Naerys supposedly loved each other.[8][9] According to the singers, both Aemon and Naerys cried the day Naerys married Aegon in 153 AC, although historians report that Naerys had only cried during the bedding, while Aemon had quarreled with Aegon at the wedding feast.[1] Aemon grew to be so accomplished in the lists and with the sword that he was deemed worthy of carrying the Valyrian steel sword Dark Sister.[1] Shortly after Naerys and Aegon's wedding,[10] Aemon joined the Kingsguard, taking his vows at the age of seventeen during the reign of his uncle, King Aegon III Targaryen.[1][11][12] During his life, Aemon would serve under five kings: his uncle Aegon III, his cousins Daeron I and Baelor I, his father Viserys II, and lastly his brother Aegon IV.

Aemon took part in the invasion of Dorne, led by his cousin and king, Daeron I Targaryen. Aemon prevented an assassination attempt on Daeron by throwing himself in the path of a poisoned arrow meant for his king. Aemon survived the poison and was sent back to King's Landing to recover.[13]

Upon his recovery Aemon returned to Dorne to protect his king and won great fame by defeating a Dornish champion. A rebellion in Dorne undid Daeron's conquest, however. Aemon was with Daeron when he met the Dornishmen under a peace banner in 161 AC, together with four other knights of the Kingsguard. Three of those Kingsguard knights died defending Daeron, one shamefully yielded, and Aemon was captured after slaying two of the betrayers.[13] Lord Wyl of Wyl eventually put Aemon naked in a crow cage placed above a pit filled with vipers.[14] 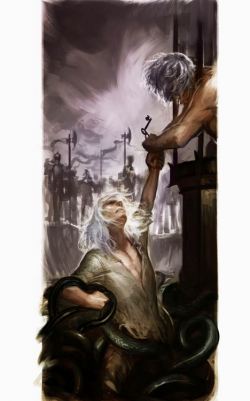 The new king, Baelor I Targaryen, made peace with the Prince of Dorne. On his return trip from Sunspear, Baelor tried to free his cousin Aemon. House Wyl was told to release Aemon into Baelor's custody, but instead they gave Baelor the key to the op and an invitation to use it. The Dragonknight, fearing for his cousin and new king's safety, begged Baelor to leave him, but Baelor refused and walked into the pit.[14]

Singers say the snakes bowed their heads and refused to bite Baelor due to protection from the gods.[14] Some maesters believe Baelor was bitten six times before reaching Aemon's cage,[14] while Dornishmen claim the king was bitten half a hundred times before using the key.[15] The freed Aemon carried Baelor upon his back, while the Wyls wagered on how long they would last.[14]

The venom put Baelor in a coma, so Aemon carried the comatose king north. A septon in a village located on the Boneway in the Red Mountains gave Aemon clothing and an ass to carry Baelor. The cousins arrived at Blackhaven where the castle's maester treated Baelor. The king eventually awoke upon the journey to Storm's End but was half a year more before he was fit to travel to King's Landing.[14]

Aemon's elder brother, Aegon IV, succeeded their father, Viserys II. During Aegon's reign, Aemon remained the Lord Commander of the Kingsguard,[citation needed] a position he held until his death.

When Naerys was accused of adultery and treason by Ser Morgil Hastwyck, Prince Aemon defended his sister's honor in trial by combat and slew Morgil.[16] This inspired many songs and furthered Aemon's renown, much to King Aegon's annoyance.[6]

Rumors remained about Aemon being the actual father of Aegon's son and heir, Prince Daeron.[11] This caused several people to look at one of Aegon's bastards, Daemon Blackfyre, as the new heir to the throne. The truth of these rumors have never been proven or disproven. According to the writings of Maester Kaeth in Lives of Four Kings, Aegon IV secretly started the rumors of Naerys's adultery and used Morgil to instigate this tale, though at the time Aegon denied this. These accusations coincidentally started when Aegon and his heir, Prince Daeron, were quarreling. Daeron opposed Aegon's plan for an unprovoked war on Dorne, and the prince being Aemon's son would give King Aegon a legitimate reason to set aside his heir in favor of his bastard, Daemon.[6]

Queen Naerys Targaryen was near death after the birth of Daenerys and a stillborn son. There were no known rumors about the parentage of Princess Daenerys.[6] Aegon's Hand of the King, Lord Bracken, hoped the king would marry his daughter Barba, the mother of Aegon's bastard Aegor Rivers. Naerys recovered, however, and Prince Daeron and the Dragonknight forced Barba to leave with the infant Aegor for Stone Hedge.[6] In contrast to Barba, Aegon's next mistress, Melissa Blackwood, was befriended by Aemon, Daeron, and Naerys.[6]

Disguised as a mystery knight, Prince Aemon once won a tourney after his brother Aegon had forbidden him to take part, because Aegon wanted to crown his mistress of that time as the queen of love and beauty. Disguised as the Knight of Tears, Aemon won the tournament and named Naerys Targaryen in place of the mistress.[17]

Despite Aegon's feelings of disrespect and hatred towards Aemon and Aegon's provocations, Aemon died honorably, defending his brother and king against the assassination attempt by two brothers of House Toyne who sought revenge for the torture and execution of their brother, Ser Terrence Toyne.[18][19][11] Queen Naerys grieved Aemon's death and died in childbirth a year later.[6]

King Aegon IV did little to honor the Dragonknight's memory. Aegon began to make barely-veiled references to his son Daeron's alleged illegitimacy, something he only dared to do because both Naerys and Aemon were dead.[20] Aegon's attempts to blacken his brother's name failed, as Aemon is remembered as a heroic figure on par with legends of the Age of Heroes and his memory greatly respected throughout Westeros, while the king was posthumously dubbed Aegon the Unworthy.

Daeron II, Aemon's nephew (or son, according to the rumors), named his grandson Aemon Targaryen in honor of the Dragonknight.[11][21] Tyrion Lannister uses Aemon as comparison when describing the fame of Barristan Selmy among smallfolk.[22]

The days when men like Ryam Redwyne and Prince Aemon the Dragonknight wore the white cloak are gone to dust and song.[23]

My grandfather named me for Prince Aemon the Dragonknight, who was his uncle, or his father, depending on which tale you believe. Aemon, he called me ...[21]

Arianne: And the Dragonknight? The noblest knight who ever lived, you said, and he took his queen to bed and got her with child.
Arys: I will not believe that. The tale of Prince Aemon's treason with Queen Naerys was only that, a tale, a lie his brother told when he wished to set his trueborn son aside in favor of his bastard. Aegon was not called the Unworthy without cause.[24]

When he was born they named him for a hero who had died too young.[25]

Why, every child in Westeros knows how Prince Aemon the Dragonknight championed his sister Queen Naerys against Ser Morghil's accusations.[26]

Not every man has it in him to be Prince Aemon the Dragonknight or Symeon Star-Eyes...[27]