Aeron Greyjoy is the youngest son of the deceased Lord Quellon Greyjoy and Lady Sunderly, and is a younger brother of Lord Balon Greyjoy. As a result of a near-death experience during the Greyjoy Rebellion, Aeron became a priest of the Drowned God, and is now called the Damphair because of his wet hair. In A Feast for Crows he becomes a POV Character.

Aeron is tall and thin with fierce black eyes and a beak of a nose.[1] He garbs himself in roughspun robes dyed in the green, grey, and blue of the Drowned God. He never cuts his hair, which falls to his waist and has seaweed woven into it.[2] See also this collection of images. He carries a waterskin filled with seawater, which he uses to bless those who desire it.

Aeron's transformation has made him more devoutly devoted to the god in his watery halls. He is now a dour, humorless man who views every breath as a gift that is wasted if it is not used to extol the virtues of following the Drowned God's path.[3]

Aeron was born the youngest of the Greyjoy brothers. At six-and-ten he called himself a man, but in truth he had been a ribald drunk, who would sing, dance, play pipes, juggle and ride horses. He drank much, and claimed no man could piss longer or farther than him. He once wagered his ship against a flock of goats that he could douse a hearth-fire by urinating on it.

During his brother Balon's rebellion, Aeron joined with Victarion and Euron in raiding the coasts. Aeron nearly drowned when his ship was sunk off the coast of Fair Isle, when the ironborn fleet was caught in a trap set by the Master of Ships, Lord Stannis Baratheon. Aeron was initially believed to be lost at sea, but he washed ashore and was discovered by local fishermen, who led him to Lannisport in chains.

Aeron nearly drowned when his ship was sunk off the coast of Fair Isle. © FFG

Aeron spent the rest of the rebellion as a prisoner of the Lannisters, but he was later returned to the Iron Islands. He came back a changed man. Due to his near-death experience he underwent a spiritual reawakening, and dedicated himself to the worship of the Drowned God. He became hard, humorless, and ascetic, living as a hermit on the beach, spreading the word of their god, and became known primarily by his new name, Damphair. Fellow holy men, called Drowned Men, do his bidding without question, and he is greatly respected by the ironborn in general.[2]

Aeron fears his brother, Euron, for reasons that are not presently clear. It is hinted that he may have been sexually molested during his childhood: he has recurring memories and nightmares of a door with screeching hinges, which he associates with Euron.[4] He is still afflicted with guilt over the death of another brother, Urrigon, who died from the infection of a wound that occurred while he and Aeron performed the finger dance, a traditional axe-juggling game among the ironborn.[2]

In the early phases of the War of the Five Kings, Aeron is sent to bring Theon Greyjoy to his father at Pyke when he is dispatched by Robb Stark to negotiate an alliance.[1] When Balon declines the alliance offer and launches his own offensive against the North, Aeron is assigned to accompany Theon as he raids the Stony Shore as a diversion.[5] The ironmen take Benfred Tallhart prisoner. When Tallhart refuses to answer questions Aeron and Theon put to him, Aeron commands that he be drowned. After the first raid Theon decides to take Winterfell. Aeron goes on to raid the next village.[5] 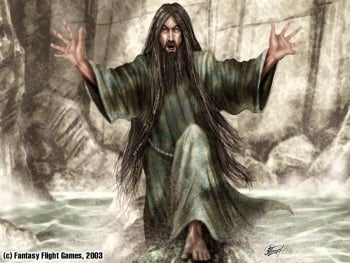 After finishing the reaving, Aeron returns to his normal priestly duties until he learns that his oldest brother, King Balon, has died and another brother, Euron, has claimed the Seastone Chair. Fearing that Euron will be the ruin of the ironmen, Aeron uses his influence as a high priest of the Drowned God to bring about a kingsmoot for the selection of Balon's replacement.[2] He hopes to crown his third brother, Victarion, whom he knows will continue Balon's traditional and conservative ways. The plan goes awry, however, and Euron is able to claim the throne. Aeron announces plans to try to rouse the people against the "godless" Euron, and disappears the next day. His fate is unknown.

Aeron's niece, Asha Greyjoy, tells Tristifer Botley that no one has seen the Damphair since the kingsmoot, but his Drowned Men claim that he is hiding on Great Wyk and will soon come forth to call down the wrath of the Drowned God on Euron Crow's Eye and his minions. Erik Anvil-Breaker is also searching for Aeron by hunting down the Drowned Men. Tristifer tells Asha he suspects that Euron slit Damphair's throat and that Erik's search is just to make the ironborn believe the priest escaped.[6]

What is dead may never die, but rises again, harder and stronger.[1]

Young I was, and vain, but the sea washed my follies and my vanities away. That man drowned, nephew. His lungs filled with seawater, and the fish ate the scales off his eyes. When I rose again, I saw clearly.[1]

The ironborn shall be waves ... Not the great and lordly, but the simple folk, tillers of the soil and fishers of the sea. The captains and the kings raised Euron up, but the common folk shall tear him down. I shall go to Great Wyk, to Harlaw, to Orkmont, to Pyke itself. In every town and village shall my words be heard. No godless man may sit the Seastone Chair![7]