Difference between revisions of "Children of the Forest" 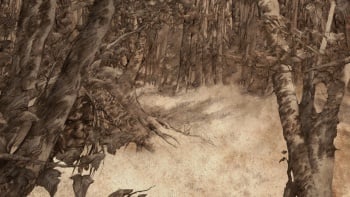 Child of the Forest, in its natural habitat 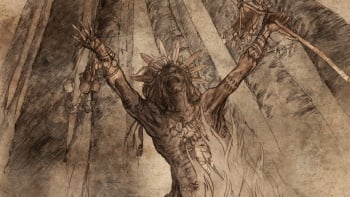 Depiction of Greenseer sing the songs of the earth

The Children of the Forest, sometimes referred to simply as the "children" are a mysterious non-human race that originally inhabited Westeros continent, long before the arrival of the First Men during the Dawn Age, more than 12,000 years ago.

Little is known about the children. They are a mysterious and magical people who have not been seen by humans for thousands of years. Tales describe them as diminutive humanoid creatures, dark and beautiful, at their tallest no larger than children. The giants call them woh dak nag gram ('little squirrel people'). They call themselves in the True Tongue those who sing the songs of the earth. [1]

The children did not use metal, weave cloth or build cities; instead they lived off the land, using stone implements, wearing bark leg-bindings and shirts of woven leaves, dwelling in caves, crannogs, and hidden tree villages. Males and females both hunted side by side. They were a people with a deep connection to the land.[2] The children wielded obsidian weapons and bows in battle, but also used powerful magic.

Legends say the children of the forest were gifted with supernatural powers and magic; having power over the beasts of the wood, the ability to wear an animal’s skin, and the skill to create music so beautiful as to bring tears to the eyes of any who heard it, and the greensight ability (although the Maesters believe that the greensight was not magic, simply another kind of knowledge). It was the children who carved the faces on the weirwoods to keep watch over the woods.[3] They believe that their wisdom had something to do with the faces in the trees [3] The children of the forest believed that the weirwood trees were the Gods, and when they died they became a part of them.[4]

They were smaller than men with nut-brown skin, dappled like a deer's with paler spots. They had large ears that could hear things that no man could hear.

They usually had large eyes, great golden cat's eyes, that could see down passages where a boy's eyes saw only blackness. A few had green or red eyes; these had the gift of greensight to be greenseers.

Their hands had only three fingers and a thumb, with sharp black claw instead of nails.[5] Slight as they were, the children were quick and graceful.

It is unknown for how long the children lived alone in Westeros, nor where they themselves came from. Eventually about 12,000 years ago, they came in contact with the First Men, the first outsiders. These invaders brought with them bronze, great leathern shields, and the first horses and their own gods. Burning the great Weirwoods as they came, leading to war between the two.

The two races fought a desperate war for dominance, the children used their magic to shatter the Arm of Dorne, the land-bridge through which the first men came, in a futile attempt to end the invasion and later flooded the Neck, legend has it that the children called upon their gods from the Children's Tower to send the hammer of the waters to smash the Neck, but it was not enough to stop the advance of the First Men. Eventually they fought one another to a standstill. The two races agreed to peaceful coexistence and signed the Pact on the Isle of Faces, granting the open lands to humanity and the forests to the Children.

The Pact lasted for four thousand years before the enigmatic Others invaded from the uttermost north, bringing death and destruction to both races, during an extended period of winter known as The Long Night, the children of the forest joined with the First Men, to fight against the Others in the War for the Dawn. Eventually the Others were driven back into the Lands of Always Winter.

The children of the forest taught the worship of the Old Gods to the First Men, but this was largely supplanted in the South by the Faith of the Seven after the Andal Invasion. Relations between the children and humans grew distant over the years, until they ceased altogether. By the time of Aegon's Landing, humans had not seen the children for thousands of years.[2]

During the Age of Heroes it was also recorded by the Night's Watch that the children of the forest gave the black brothers a hundred obsidian daggers every year.[6]

Although people in Westeros believe the children of the forest to be extinct there are a few that still live in the world of men. A dwindling remnant of their population is located far north of the Wall, in a cave system under a hill; the entrance is a warded cleft in the hillside.[5]

The caves are timeless, vast, silent. They are home to more than three score living singers and the bones of thousands dead, and extend far below the hollow hill. The children of the forest live with whom they refer to as the Last Greenseer. In the caves there are passages that go deep, bottomless pits and sudden shafts, forgotten ways that lead to the very center of the earth. Leaf tells Bran Stark that even the children of the forest have not explored them all, even though they have lived there for a thousand thousand man-years. Bran realises that they are indeed singers, he hears them singing. They sing in the True Tongue so he cannot understand the words, but their voices are as pure as the winter air. [5]

Bran asks Leaf were the rest of the children are, she replies:

Gone down into the earth … Into the stones, into the trees. Before the First Men came all this land that you call Westeros was home to us, yet even in those days we were few. The gods gave us long lives but not great numbers, lest we overrun the world as deer will overrun a wood where there are no wolves to hunt them. That was in the dawn of days, when our sun was rising. Now it sinks, and this is our long dwindling. The giants are almost gone as awell, they who were our bane and our brothers. The great lions of the western hills have been slain, the unicorns are all but gone, the mammoths down to a few hundered. The direwolves will outlast us all, but their time will come as well. In the world that men have made, there is no room for them, or us.[5]

Known children of the forest