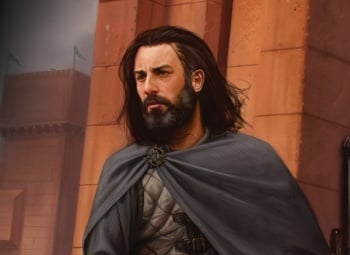 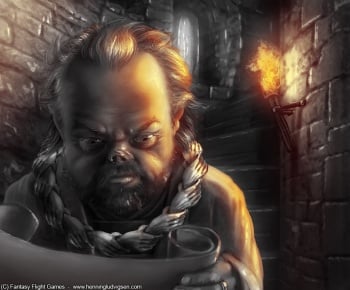 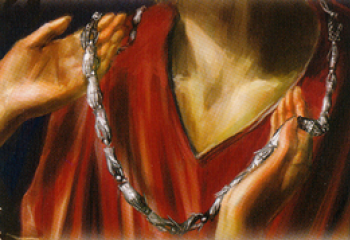 The Hand resides in a tower of the Red Keep called the Tower of the Hand.[2] His badge of office always includes a hand, though each Hand can design his own. Brynden Rivers used a iron brooch,[3] Eddard Stark used a silver clasp,[4] while Tyrion and Tywin Lannister used a golden chain.[5][6] Servants of the Hand might wear the emblem of a hand.[7]

Upon the death of his Hand, Lord Jon Arryn, King Robert I Baratheon asks Lord Eddard Stark to serve as Lord Arryn's replacement.[1] After Robert dies, however, his son, Joffrey Baratheon, has Ned Stark executed.[9] Joffrey's grandfather, Lord Tywin Lannister serves as the new Hand of the King.[10] Because Tywin is capaigning in the riverlands during the War of the Five Kings, he sends his younger son, Tyrion to serve as acting Hand to King's Landing.[11]

As acting Hand, Tyrion Lannister serves in King's Landing until Lord Tywin Lannister arrives during the Battle of the Blackwater.[6]

Lord Mace Tyrell serves as Hand to Renly Baratheon, a rival claimant to the Iron Throne, who is killed at Storm's End.[12]

Following the Battle of the Blackwater, Tywin serves as Hand to Joffrey and, after Joffrey's death, to King Tommen Baratheon,[13] until he is murdered.[14]

Lord Alester Florent serves as the Hand to Stannis Baratheon, a rival claimant to the Iron Throne.[15] After Alester has been arrested and executed for treason, Axell Florent tries to make Davos Seaworth advise Stannis to name himself as Hand of the King, but Stannis chooses Davos to be his new Hand instead.[16]

After she fails to convince Jaime Lannister to become Hand,[17] and refuses to meet the terms Ser Kevan Lannister has for the office[18], Ser Harys Swyft[19] and later Lord Orton Merryweather[20] serve as Hand of the King for King Tommen I Baratheon, chosen by his mother, Queen Regent Cersei Lannister. After Cersei is arrested by the Faith of the Seven, Merryweather resigns the small council and flees King's Landing.[21]

After Merryweather has resigned, Ser Kevan Lannister, as Regent, elevates Mace Tyrell to Hand of the King for King Tommen I.[22]

Meanwhile, Ser Davos Seaworth continues as Hand of the King for Stannis Baratheon,[23][24] while Ser Axell Florent is calling himself the Queen's Hand to Selyse Florent.[25]

In Meereen, Ser Barristan Selmy serves as Hand for Queen Daenerys Targaryen in her absence, after King Hizdahr zo Loraq has been removed from power.[26]

Lord Jon Connington serves as the Hand to Prince Aegon Targaryen, despite the latter not having been crowned king yet.[27] Connington is styled "Hand of the True King".[28] 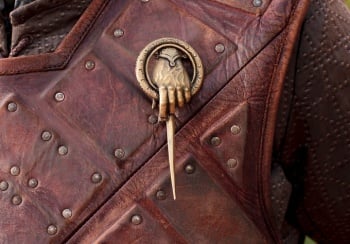 I sat on his council for fifteen years, helping Jon Arryn rule his realm while Robert drank and whored, but when Jon died, did my brother name me his Hand? No, he went galloping off to his dear friend Ned Stark, and offered him the honor. And small good it did either of them.[61]

A weak ruler needs a strong Hand, as Aerys needed Father. A strong ruler requires only a diligent servant to carry out his orders.[42]

The Hand should speak with the king's voice.[62]

Davos: The King's Hand should be a highborn lord, someone wise and learned, a battle commander or a great knight...
Pylos: Ser Ryam Redwyne was the greatest knight of his day, and one of the worst Hands ever to serve a king. Septon Murmison's prayers worked miracles, but as Hand he soon had the whole realm praying for his death. Lord Butterwell was renowned for wit, Myles Smallwood for courage, Ser Otto Hightower for learning, yet they failed as Hands, every one. As for birth, the dragonkings oft chose Hands from amongst their own blood, with results as various as Baelor Breakspear and Maegor the Cruel. Against this, you have Septon Barth, the blacksmith's son the Old King plucked from the Red Keep's library, who gave the realm forty years of peace and plenty. Read your history, Lord Davos, and you will see that your doubts are groundless.[63]