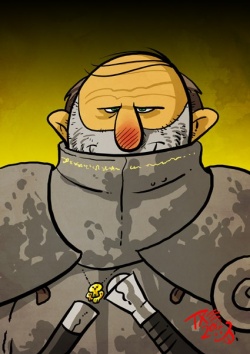 Harry Strickland's great grandsire lost his lands when he rose in rebellion with Daemon Blackfyre. Harry was born in exile and raised with the Golden Company, as was his father and his grandfather. He likes to boast "Gold for four generations". He complains often of blisters on his feet from long marches and is not the bravest of men. Prior to his elevation to leadership Harry was the company paymaster.[1] After the death of the previous commander, Blackheart, Harry was made the new company commander.

Harry brings the company to three miles south of Volon Therys, where they are met by Jon Connington and Aegon Targaryen.[1] When the company invades Westeros, Harry is weary and reluctant to fight. Connington looks down on him constantly as a coward.[2]