King's Landing is the capital of the Seven Kingdoms, located in the Crownlands on the east coast of Westeros. It is situated along the kingsroad at the mouth of the Blackwater Rush and overlooks Blackwater Bay. It is the site of the Iron Throne and the Red Keep, which is the seat of the king, Robert Baratheon from House Baratheon of King's Landing.

The main city is surrounded by a wall, manned by the City Watch of King's Landing, also known as the gold cloaks. King's Landing is extremely populous, but rather unsightly and dirty compared to other cities. Poorer smallfolk build shanty settlements outside the city. The stench of the city's waste can be smelled far beyond its walls. It is the principal harbor of the Seven Kingdoms, rivaled only by Oldtown.[1]

Nearby towns include Rosby and Duskendale to the northeast and Tumbleton to the southwest, while the kingswood is found south of the capital across the Blackwater.[2]

Prior to the War of Conquest, the area around the future King's Landing was just hills and forests, with only a handful of fisherfolk living north of the Blackwater Rush.[3] Historically, the mouth of the Blackwater had been claimed by a hundred kings from the Reach, the Riverlands, and the Stormlands.[4] Three hundred years ago, Aegon the Conqueror from House Targaryen led his army from Dragonstone and landed at the mouth of the Blackwater Rush, building his first fortress of wood and earth, the Aegonfort,[5] on top of the highest hill. Later, when Aegon finalized his conquest, he decided to build his capital around that fort, since it was more centrally located than any other and not part of the former kingdoms, setting the king apart from his new vassals.[3]

In time, the city was expanded by the Targaryen kings. The Red Keep was completed during the reign of Maegor the Cruel, the Great Sept was built to show the Targaryens' piety and adherence to the Faith of the Seven after giving up the old gods of Valyria,[6] and the Dragonpit was constructed to house the Targaryen dragons.

In the civil war known as the Dance of the Dragons, the city fell when it was invaded by Queen Rhaenyra Targaryen and her blacks. Later in 130 AC, riots broke out against the rule of Rhaenyra. These culminated in the mass storming of the Dragonpit and the deaths of five Targaryen dragons, thousands of smallfolk and the ruination of the Dragonpit.[7]

During the Blackfyre Rebellion in {{Date}196}}, the army of Daemon Blackfyre, the bastard half-brother of King Daeron II Targaryen, threatened King's Landing, but they were stopped at the Battle of the Redgrass Field.

When the Great Spring Sickness engulfed Westeros, four in ten inhabitants were killed by the outbreak. Funeral pyres which took place in the ruins of the Dragonpit burned nonstop, painting the night sky in the unnatural green of wildfire.

During the civil war known as Robert's Rebellion and the War of the Usurper, King Aerys II Targaryen contemplated burning the city to the ground to "save" it from the rebels, and it was sacked shortly after by a Westerlands host commanded by Aerys's former Hand of the King, Lord Tywin Lannister. Robert Baratheon became the new king on the Iron Throne, forming House Baratheon of King's Landing.

A tourney was held in King's Landing to honor the twelfth name day of Robert's heir, Prince Joffrey Baratheon.

Following the sudden death of Lord Jon Arryn, Lord Eddard Stark travels to King's Landing to become the new Hand of the King to Robert Baratheon. Robert's brother, Stannis Baratheon, leaves the capital to return to his seat of Dragonstone. The Tourney of the Hand is held at the city to honor Ned Stark, who does not approve of the extravagance.

Ned investigates Jon Arryn's death and learns that Queen Cersei Lannister's children were fathered not by Robert, but by her twin brother, Ser Jaime Lannister. Following Robert's death, Cersei has Ned imprisoned for plotting against Prince Joffrey Baratheon, now Robert's successor as king. To the surprise of his small council, Joffrey orders Ned's execution at the Great Sept of Baelor rather than allow him to join the Night's Watch. Sansa Stark is held captive by the Lannisters, but Arya Stark escapes the city. Because Lord Tywin Lannister is campaigning against Robb Stark, he sends Tyrion Lannister to act as Hand to Joffrey.

Another tourney is held in the city, this time to honor King Joffrey's thirteenth name day. During the War of the Five Kings, King's Landing is cut off from trade and food supplies by the blockade of Lord Mace Tyrell. This leads to mass famine and a massive riot in which the High Septon is killed.

The city is besieged by King Stannis Baratheon during the Battle of the Blackwater, but Joffrey's reign is secured by the timely arrival of Lord Tywin Lannister and his new ally, Mace Tyrell.

King Joffrey Baratheon weds Margaery Tyrell at the Great Sept of Baelor, but he dies during the reception at the Red Keep.[8] He is succeeded by his younger brother, Tommen Baratheon.

Queen Cersei Lannister serves as the regent for young King Tommen. She uses wildfire to burn the Tower of the Hand.[9] Pious sparrows travel to the capital in support of the Faith of the Seven.[10]

Amidst growing unrest after the arrest of Queen Margaery by the Faith, Cersei allows Lord Aurane Waters, the Master of Ships, to launch new dromonds in a show of force. However, Aurane sails from King's Landing when Cersei is herself arrested.[11]

As atonement for her confessed sins, Cersei walks from the Great Sept of Baelor to the Red Keep amidst the smallfolk of King's Landing.[12]

The city is roughly square-shaped, sprawling across several miles and defended by tall walls. There are seven gates leading into the city: the Dragon Gate, the Lion Gate, the Mud Gate, the Old Gate, the Gate of the Gods, the King's Gate, and the Iron Gate. Within the walls, the city is dotted with manses, arbors, granaries, brick storehouses, timbered inns, merchant stalls, taverns, graveyards and brothels. There is a fish market. Hundreds of quays can be found in the harbor. Between buildings the roads are broad, lined with trees and branching alleys and streets.[3] Just within the Mud Gate lie the three great trebuchets called the Three Whores, a new addition to the defense of the city.[13][1]

The city covers the north shore of the Blackwater and covers three tall hills, named after Aegon and his two sisters, Visenya and Rhaenys. Aegon's High Hill, surmounted by the Red Keep, the royal castle located in the south-eastern corner of the city, overlooks the bay directly, whilst Visenya's Hill to the west is crowned by the marble-walled Great Sept of Baelor and its seven crystal towers. Rhaenys's Hill in the north is capped by the collapsed ruins of the Dragonpit dome, its bronze doors shut for a century and a half since the last dragon died.[3]

The poor reside in the slums which are called Flea Bottom, a maze of narrow streets and alleys, where many beggars and the poorest part of the city's population resides; they regularly subsist on "bowls of brown", a mystery stew that can include the meat of rats and murder victims, among other things. The richest residents live on the other side of Rhaenys's Hill from Flea Bottom. According to semi-canon sources the richer areas of King's Landing lie near the Old Gate.[14]

Large tournaments are held outside the city, beside the Blackwater [15]

Seven is a sacred number for the Faith, thus the reason Aegon the Conquerer had seven huge gates built as the entrances into the capital of King's Landing. Each of these gates is protected by portcullis, heavy doors and armed guard. 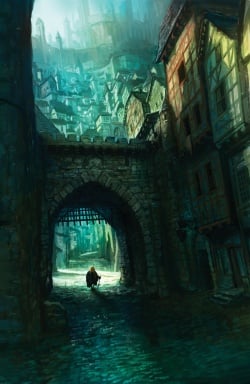 King's Landing is extremely populous, but rather unsightly and dirty compared to other cities. Its population is estimated at more than 500,000,[30] although this number varies during winters and in times of war, when people take shelter behind the city walls. George R. R. Martin has stated that the city is larger than Medieval London or Paris but smaller than Medieval Constantinople or Ancient Rome (each had a population of about 1,000,000).[31]

The City Watch of King's Landing, also called the gold cloaks, is King's Landing's main military formation, in charge of guarding and policing the town and its surroundings. Its men are 2,000 strong, the number being increased in times of need or war.

The royal fleet guards the entrance to Blackwater Bay and patrols the bay and the Blackwater Rush.

"Is everyone someone's informer in this cursed city?"

One peddler was hawking rats roasted on a skewer. "Fresh rats," he cried loudly, "fresh rats." Doubtless fresh rats were to be preferred to old stale rotten rats.[32]

Smoke, sweat, and shit. King’s Landing, in short. If you have a good nose you can smell the treachery too.[33]