Difference between revisions of "Knight of the Laughing Tree"

The Knight of the Laughing Tree is so-called because of the blazon on his shield, a smiling heart tree. His true identity remains unknown. According to a semi-canon source, the bullied crannogman was Howland Reed.[1] 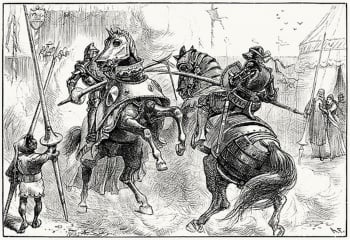 The mystery knight attracted unwanted attention. Robert Baratheon and Richard Lonmouth were determined to unmask him, while Aerys II was certain that the man was his enemy. By the next morning, the knight had disappeared. An angry Aerys sent Rhaegar to search for the vanished knight, but only his shield could be found, abandoned in a tree.[2]

Meera's story contains several potential clues about the identity of the mystery knight. Fans have often based their evidence for his supposed identity on the disappearance of Lyanna shortly after the tournament.[5][6]