For the mule, see Maester (mule) 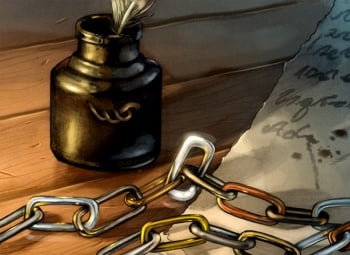 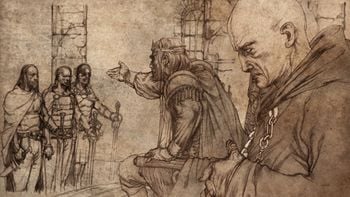 Maester duty to the realm

The maesters are an order of scholars, healers, postmen, and scientists who are trained at a school called the Citadel. House Hightower was integral in the Citadel's foundation, and continues to patronize the order. As advisers to the Westerosi nobility, the maesters have largely supplanted the Alchemists' Guild. They are sometimes called "the knights of the mind."[1]

The Citadel is an impressive structure in the city of Oldtown, and is considered the home of all maesters. Here they undergo all of their training from the time they arrive as novices until they have achieved the status of maester. At the entrance of the Citadel are green marble sphinxes.

The maesters are scholars, scientists, learned advisors to the nobility, and occasionally pseudo-religious researchers in the occult. Males of any age may begin training as a maester; females are not permitted to study or join the order. Noble families in Westeros sometimes send their younger sons to the Citadel. A bastard may study at the Citadel and become a maester. The maesters, like the brothers of the Night's Watch, are considered to be servants of Westeros and all its people and in theory have no political allegiance. After finishing his course of study, a maester is assigned to a castle, keep or other holding, and is loyal to the people of that place as a mentor, healer and adviser, regardless of changes in control of that holding. To this end a man who earns his chain is stripped of his family name and from that time on is known only by his title and first name. In practice, some maesters hold over old allegiances and loyalties.

The Grand Maester is considered the senior member of the order and serves as its representative to the king. He can only be made or unmade by the Conclave.[2] He sits on the small council and acts as the king's adviser. The Grand Maester wears many interwoven maester chains to indicate his high office, but these do not reflect his true studies. Gems are woven into the chains.[3]

Pycelle has served in the office for over forty years, though his loyalties lie with House Lannister rather than the realm. His advanced age has slowed him down, and he often dozes off during small council meetings. He was thrown in the dungeons of the Red Keep by Tyrion Lannister, but Tywin Lannister recalled him to his duties when it appeared the Citadel was going to replace him with Maester Gormon, formerly of House Tyrell. After his imprisonment Cersei perceives him as a broken man, but in spite of his past failings in court intrigue, Pycelle successfully seizes control of King Tommen I and the council after Cersei's arrest by the High Sparrow, offering Kevan Lannister the regency. As they attempt to fix Cersei's follies, Pycelle and Kevan are both assassinated by Varys, the former master of whisperers.

The perceived "master" of any area of study is given a mask, ring, and rod and the title Archmaester in the corresponding metal to signify his expertise. For example, an archmaester who specializes in ravenry will have a mask, ring, and rod made of black iron. Archmaesters are the senior members of the Order and are given the right to sit on the Conclave. The Conclave is the governing body of the Citadel and is the same body that elects the Grand Maester. All the meetings of the Conclave are confidential in nature and conducted behind closed doors at the Citadel only.[2]

Marwyn the Mage is the order's leading researcher into the occult and magic. For his strange pursuits and gruff manner he is ostracized by others in the Citadel. 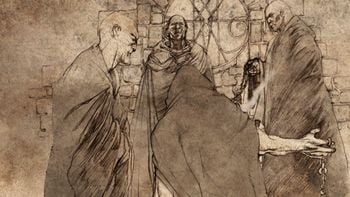 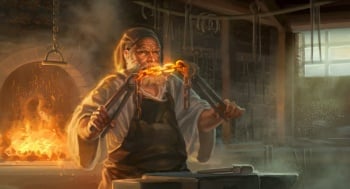 Maesters begin their training as novices in the Citadel. Once they begin their study and have been seen as proficient in a particular course of study they are tested and awarded a link of a certain metal to reflect their skill and knowledge. A student with a link is known as an acolyte until he has a full chain; it is not until he has completed extensive study in various subjects and has earned enough links to form a chain (to be worn around the neck) that he is considered worthy of advancement to the title of Maester, no longer a student but a peer. The night before the acolytes swear their vows to become maesters, they must stand a vigil in a vault with a black Glass candle. He is allowed no lantern or any other source of light. Unless he can light the candle, he will spend the night in total darkness.[5] There have been whispers that the maesters have held much more power and sway than they are ready to admit. Archmaester Marwyn suspects that they had a role in the demise of House Targaryen's Dragons. Some consider most maesters to be categorically opposed to magic and its influence on Westeros. 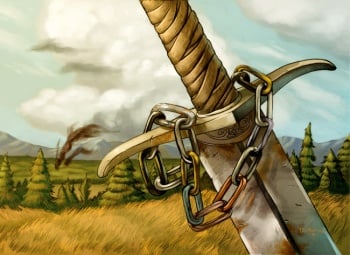 Iron link for studies in the field of warcraft. Art by Tim Durning © A maester advises his lord. © FFG

The collar signifies that maesters do not serve themselves, but are instead servants of all of Westeros. The collar consists of several links of different types of metal. These chains are formed from every metal known to man, but almost no maester will ever wear them all. Maesters do not remove the chain ever, not even when sleeping.[6]

According to semi-canon sources, it is possible to earn multiple links of the same metal.[7] 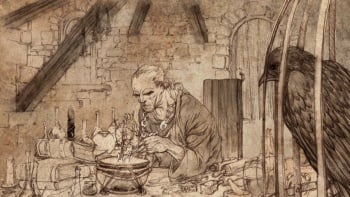 Maesters chiefly communicate through messenger ravens. These ravens are trained specifically for one route; for example, for a message that must be sent to Castle Black, the maester uses the raven from the Castle Black cage. One of the typical duties of a maester is care of a keep's ravens. A special breed of white ravens that are larger and more intelligent than average are maintained at the Citadel for important communications. Maesters also constantly monitor the seasons. When the seasons are about to change, they send white ravens to spread the announcement throughout the realm.[9] Maesters who are skilled in astronomy often watch the skies and study constellations. When the red comet appeared during the events of the War of the Five Kings, the maesters were among the first to notice.

If you do not have a maester, it is taken to mean that you are of little consequence.[10]

Isn't it clever how the maesters go only by one name, even those who had two when they first arrived at the Citadel? That way we cannot know who they truly are or where they come from. [10]

This page uses content from the English Wikipedia. The original content was at Maesters. The list of authors can be seen in the page history of Maesters. As with A Wiki of Ice and Fire, the content of Wikipedia is available under the Creative Commons Attribution-ShareAlike License.