Difference between revisions of "Tyrosh"

Tyrosh is a harbor city and one of the Free Cities. It sits on an island to the north of the Stepstones, just off the coast of the Disputed Lands of Essos.[1] The ruler of Tyrosh is called the Archon.[2] He is chosen from among the members of a convlace of the wealthiest and noblest of the city.[3]

Tyrosh is far larger than the shadow city of Sunspear, being described as boisterous and loud. At the mouth of its harbor lies the Bleeding Tower.[4] There is a fountain in Tyrosh called the Fountain of the Drunken God. There is a temple called the Temple of Trios with a big statue of the three-headed Trios beside the temple's doors.

Slaves outnumber the freeborn three to one.[3] 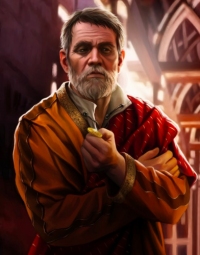 Tyroshi are renowned for their greed.[5] They constantly fight to gain control of the Stepstones and Disputed Lands.

They love bright colors, even coloring their hair brightly.[5] Their inventors are known for creating ornate helmets and ingenious torture devices. Their dialect is a corrupted form of High Valyrian.[6]

Slaves and sellswords are common in Tyrosh. It is renowned for its pear brandy,[7] and Tyroshi armorsmiths can make fantastic helmets shaped like birds and animals, chased with precious metals

Tyrosh began as a military outpost, with inner walls of fused black dragonstone, raised initially to control shipping passing through the Stepstones. Not long after the city was founded, however, a unique variety of sea snail was discovered. These snails secreted a substance that, when properly treated, yield a dye that soon became wildly fashionable among the nobility of Valyria. Thus, merchants came to Tyrosh by the thousands, and the outpost grew into a major city within a single generation. Tyroshi dyers soon learned to produce different colors of dyes by varying the diet of the snails.[8]

A few generations after the Doom, the Free City of Volantis thought to add Tyrosh to her conquests, but Pentos came to her aid, along with the Stormlands and Aegon Targaryen of Dragonstone, and Lys and Myr both rose in rebellion against Volantis. Tyrosh joined forces with Myr and Lys and defeated Volantis in the Battle of the Borderland.[8]

During the last years of Viserys I Targaryen and the Dance of the Dragons, Tyrosh was part of the Triarchy along with Lys and Myr. The flamboyant rogue Racallio Ryndoon was a Tyroshi captain who led the Triarchy's counter-attack in 110 AC against Prince Daemon Targaryen. By Maiden's Day, 130 AC, the alliance began to tear itself apart. The Triarchy was brought down by internal conflict following the murder of a Lyseni admiral by a rival for the affections of the Black Swan, a famed courtesan, and, later, an alliance of Braavos, Pentos, and Lorath.[8]

The Band of Nine, a group of sellswords, pirates and merchants who had conquered the Disputed Lands, marched on Tyrosh and took it. They installed the wealthy merchant Alequo Adarys as a tyrant and then moved on. While the rest of the possessions of the Band of Nine were lost soon after the death of Maelys Blackfyre in the War of the Ninepenny Kings, Alequo managed to hold on for six more years before he too was removed from power.[6]

When Daenerys Targaryen was a girl, she and her brother Viserys spent some time in Tyrosh when they were wandering from place to place.

The green-bearded brother of the Archon of Tyrosh attends the introduction of Daenerys Targaryen to her future husband Khal Drogo hosted in Drogo’s nine-towered manse in Pentos.[2]

During the Battle of the Whispering Wood a Tyroshi sellsword leading Ser Forley Prester’s freeriders strikes his banners and goes over to Robb Stark. Ser Kevan Lannister had warned Ser Jaime Lannister not to trust him. [9]

Tyrosh is on the verge of going to war with Lys.[10]

Tyrosh and Lys are now on the verge of war with Myr.[11] It is later rumored that the Archon had offered terms to Lys to end the trade war.[12]

In Dorne Prince Doran Martell reveals to his daughter, Princess Arianne, that at one point she was to have been sent to Tyrosh to serve as the Archon's cupbearer, where she could have met her betrothed in secret but that plan fell through when he was slain in Vaes Dothrak.

Upon entering the Stinking Goose Brienne notes that the only drinkers there are three Tyroshi seamen in a corner, growling at each other through green and purple beards. In the Happy Port Samwell Tarly sees a Tyroshi sailor passed out in a corner, snoring into his huge scarlet beard.

As punishment, Garin is to spend the next two years in Tyrosh.

The captain of the Huntress tells Samwell Tarly that the ironmen had managed to capture a Tyroshi merchantman in the Redwyne Straits. They killed the ship's crew and disguised themselves as Tyroshi sailors intending to sneak into Oldtown. However their plot was foiled when the Lady of the Tower's oarsmaster hailed the ironmen in the Tyrohi language and they could not reply to his greeting.

Blue-bearded fighters from Tyrosh are among those who come to Meereen to battle in Daznak's Pit.[13]