Difference between revisions of "Victarion Greyjoy"

Victarion Greyjoy is a member of House Greyjoy and is a younger brother of Lord Balon Greyjoy. The Lord Captain of the Iron Fleet, Victarion's flagship is Iron Victory. He is a capable commander and a fierce warrior in battle, but has a calm demeanor outside of it, thinking of enemies who show bravery with great respect. He is a religious man and wears full plate armor while sailing because he has no fear of drowning.

Victarion is a large and powerful man, wearing plate armor in combat and wielding a cruel axe. He wears a helm in the shape of a kraken.[1] 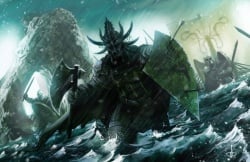 Victarion recognized the greatness of his older brother, Balon, and followed him loyally. He commanded the Iron Fleet during the Greyjoy Rebellion. During the rebellion, using a plan Euron had concocted, they sailed into Lannisport and burned the Lannister fleet at anchor.[2] Victarion tossed the first torch onto the flagship of Lord Tywin Lannister.[3] Later in the rebellion, the Iron Fleet was smashed by Stannis Baratheon in a trap at Fair Isle, during which Victarion's younger brother Aeron's vessel, the Golden Storm, was chopped in half by the warship Fury.

After the rebellion's end, Victarion continued to serve as Lord Captain faithfully. His brother, Euron, seduced and impregnated Victarion's third wife, which drove Victarion to beat her to death to retain his honor. Only the taboo against kinslaying kept Victarion from killing Euron. He has not married since, nor has he forgiven Euron, who was forced into exile by Balon.[4][3]

Victarion is sent with the main strength of the Iron Fleet to take Moat Cailin by his king and brother, Balon Greyjoy.[2] Moat Cailin falls to the ironborn's surprise assault.

Upon hearing of Balon's death and the return of his hated brother, Euron, Victarion leaves a token force to defend Moat Cailin under the command of Ralf Kenning and returns to the Iron Islands with his fleet to decide on the succession of the next Iron King.[3]

Victarion makes a claim to the Seastone Chair as Balon's brother and second-in-command. Victarion makes a strong claim at the kingsmoot, but the crowd ultimately favors Euron.[5] Despite his hatred for Euron, Victarion's obedient and dutiful nature keeps him following Euron's orders. He leads the assault on the Shield Islands, slaughtering unarmored sailors and winning a duel with Talbert Serry, the son of Lord Osbert Serry, but wounds his hand during the fight. After his victory, he watches helplessly as Euron steals many of his trusted comrades away from him by giving them titles on the Shield Islands. He also deplores the cruelty Euron displays toward the slain lords' women.

Apparently oblivious to Victarion's hatred, Euron summons Victarion to a private meeting and asks him to find Daenerys Targaryen and deliver Euron's marriage proposal. Victarion agrees, but secretly plans on courting Daenerys for himself.[1] 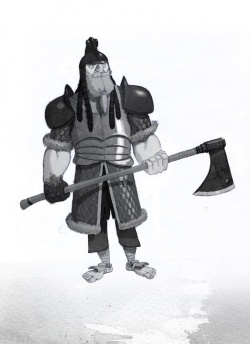 During the voyage, a Red Priest of R'hllor named Moqorro is discovered clinging to wreckage out at sea. The crew wants him killed, but Moqorro convinces Victarion to allow him to treat his wounded hand. Behind closed doors, Moqorro apparently uses magic on the lord captain; when Victarion emerges from his cabin, his hand is charred and blackened.[6]

Moqorro, like Melisandre, can see the future in the flames, and uses the magic to aid Victarion in his quest. For instance, Victarion orders his crew to kill Kerwin, as Moqorro had a vision that the maester's death would bring the ship good winds.[6] The Iron Victory's crew live in great fear of Moqorro and call him the Black Flame. Victarion makes offerings to both the Drowned God and R'hllor. Moqorro also alerts Victarion that he has seen Daenerys married in the flames, but Victarion is unconcerned by this, stating "she would not be the first woman I made a widow."[7] Moqorro tells Victarion that in order to bind Daenerys's dragons to the Iron Captain's will, Victarion must claim the dragon horn Dragonbinder with blood.[7]

The sight of their sails filled Victarion Greyjoy with content. No man had ever loved his wives half as well as the Lord Captain loved his ships.[3]

- Victarion upon boarding the Serry vessel

It was one thing to kill a foe, another to dishonor him.[1]

- Victarion disapproving of Euron Greyjoy's shaming of the Hewett women

Poison was for cravens, women, and Dornishmen.[8]

- Victarion contemplating the festering wound on his hand

Where is this Dothraki sea? I will sail the Iron Fleet across it and find the queen wherever she may be.[7]

- Victarion to a fishing ketch's master

The most beautiful woman in the world has urgent need of my axe.[7]

- Victarion, on finding out Daenerys Targaryen is encircled by her enemies in Meereen

Lord Captain of the Iron Fleet, and a fearsome warrior. I have heard them sing of him in the alehouses.[2]

Victarion is like some great grey bullock, strong and tireless and dutiful, but not like to win any races. No doubt he'll serve me as loyally as he has served my lord father. He has neither the wits nor the ambition to plot betrayal.[2]

The king must be Victarion, or the storm will slay us all.[4]