Willas Tyrell is a member of House Tyrell and the eldest son of Lord Mace Tyrell and Lady Alerie Hightower. He is the heir to Highgarden.[2]

Willas is crippled with a bad leg. He is often noted as studious, educated, and kind, and is renowned for breeding the finest hawks, hounds, and horses in the Seven Kingdoms.[3][4] He sometimes flies an eagle.[5]

Willas was born the eldest son of Mace Tyrell, Lord of Highgarden, and Lady Alerie Hightower. During his first tourney, he competed against Prince Oberyn Martell of Dorne, who knocked Willas from his horse. Unfortunately, his foot caught in his stirrup as he fell, and Willas pulled his horse on top of him, crushing his leg and leaving him a cripple.[6]

Though the incident fanned the flames of the considerable and historical enmity between Houses Tyrell and Martell, Willas bore Oberyn no personal ill will and the two long remained in correspondence, sharing a passion for horseflesh.[6] Ever since his accident, Willas has occupied himself with scholarly studies. Willas's grandmother, Olenna Tyrell, despite having a low opinion of her son Mace, has a high opinion of her grandson.[5]

Willas gave his younger brother Garlan his nickname, "Garlan the Gallant".[7] He read to his sister, Margaery Tyrell, and drew her pictures of stars.[5] 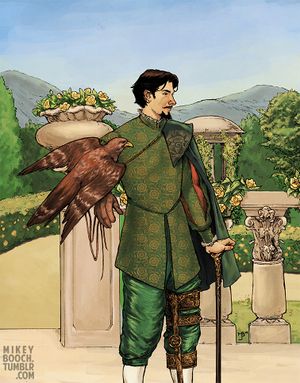 Lady Olenna Tyrell plots to have Sansa Stark married to Willas.[5] Sansa readily accepts the offer, but it is foiled after she reveals the plot to Dontos Hollard in the godswood of the Red Keep. Lord Tywin Lannister learns of the plot from Lord Petyr Baelish and hastily marries Sansa to his son Tyrion.[4] Tywin offers his daughter, Queen Regent Cersei Lannister, to be married to Willas, which would quieten rumors of her incest with her brother, Ser Jaime Lannister, but the Tyrells refuse the offer.[8]

After the taking of the Shields, Willas reportedly sends messengers to Lord Leyton Hightower ordering him to strengthen his defences in Oldtown. Willas also guesses correctly that the ironborn did not follow the coast when attacking the Shield Islands so the ambush would take the lords of the Shields off guard.[9]

The Fat Flower thrust him into tourneys at too tender an age, just as he did the other two. He wanted another Leo Longthorn, and made himself a cripple.[4]

Gentle, pious, good-hearted Willas Tyrell. Be grateful you were spared, he would have bored you spitless.[11]