From A Wiki of Ice and Fire
(Redirected from Maelys Blackfyre)
Jump to: navigation, search

Maelys I Blackfyre,[1] better known as Maelys the Monstrous, was the last of the Blackfyre Pretenders,[2] and the last known member of the male line of House Blackfyre.[3]

Maelys had a grotesquely huge torso and arms. He had a second head sprouting from his neck, no bigger than a child's fist.[1][4] He was inhumanly strong, able to kill a destrier with a single punch, and tear a man's head clean off his shoulders. He had a savage nature.[1]

Maelys is the last known descendant of Daemon I Blackfyre, the first of the five Blackfyre Pretenders. He was named "Maelys the Monstrous" for supposedly having eaten his twin in the womb, making him a kinslayer, albeit not by choice.[5] 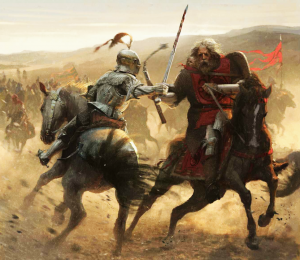 Maelys Blackfyre fights Barristan Selmy during the War of the Ninepenny Kings, as depicted by Jose Daniel Cabrera Pena in The World of Ice & Fire

In 258 AC, Maelys gathered with eight other outlaws, exiles and sellsword captains beneath the Tree of Crowns in the Disputed Lands in Essos. There, they formed an alliance called the Band of Nine, promising to aid each other in carving out a kingdom for each member. The Band of Nine pledged to help Maelys in conquering the Seven Kingdoms.[6] While it was generally believed that the Band of Nine would founder in Essos,[6][1] they managed to sack and take Tyrosh, and seize the Stepstones, which made them a real threat to Westeros. Maelys declared himself to be King Maelys I Blackfyre.[1]

In 260 AC, King Jaehaerys II Targaryen sent an army to the Stepstones to meet the Band of Nine in battle. The war, dubbed the War of the Ninepenny Kings, was fought entirely on the Stepstones. Maelys personally killed Lord Ormund Baratheon, Jaehaerys's Hand of the King, early in the war. Towards the war's end, Maelys himself was killed by Ser Barristan Selmy, a young knight from the stormlands, who thereby ended the Blackfyre threat to the Iron Throne.[1][3][2] Maelys's death decided the war, as the other members of the Band of Nine were barely interested in Westeros, and fell back to their own domains. Their union would not last much longer.[1]

Jaime Lannister reads Barristan Selmy's page in the White Book of the Kingsguard, where it is written that he slew Maelys the Monstrous, last of the Blackfyre Pretenders, in single combat during the War of the Ninepenny Kings.[2]

Jaime recalls visiting Riverrun as a boy, ignoring Lysa Tully while begging her uncle Brynden for tales of Maelys the Monstrous and the Ebon Prince.[7]

In Essos, Illyrio Mopatis tells Tyrion Lannister that when Maelys died, the male line of House Blackfyre came to an end. That night, Tyrion has a nightmare where he has two heads, and fights in battle alongside Barristan Selmy and Bittersteel, slaying his father and brother while his second head weeps.[3]

At the camp of the Golden Company, Jon Connington sees that the captain-general's tent is surrounded by a ring of pikes topped with the gilded skulls of previous captain-generals. Maelys's skull is larger than the rest, grotesquely malformed, and below it is a second, fist-sized skull, that of Maelys's nameless twin brother.[4]

Barristan Selmy recalls that King Jaehaerys II Targaryen had granted him the white cloak of the Kingsguard after he slew Maelys Blackfyre during the War of the Ninepenny Kings.[8]

When Maelys the Monstrous died upon the Stepstones, it was the end of the male line of House Blackfyre.[3]