Catelyn travels to be an envoy to King Renly Baratheon. Her group arrives as a tourney is in progress, the last few knights in the melee still fighting. Finally Brienne of Tarth defeats “Loras Tyrell. Renly names her champion and tells her she can ask any favor of him, and she asks to become a member of his Rainbow Guard. Catelyn is then introduced to Renly. After the feast that night Renly talks with Catelyn and tells her that he insists that son must bend the knee to him. Then a messenger arrives with news that King Stannis Baratheon has arrived.

Catelyn has sweet dreams of family life before this chaos befell her family. A cruel dawn wakes to reality, and weariness from riding, hurt, and duty, tired of having to be strong, and wants to weep. It is awkward dressing, but she feels she should be thankful for any use of her hands after the cut from the Valyrian steel dagger. Outside the tent she finds Shadd, preparing a breakfast of oats, and Ser Wendel Manderly who would like to supplement breakfast with quail. Catelyn states oats and bread are sufficient since they have many leagues to travel. These were two among the 20 of Robb Stark’s best Winterfell men and five lordings, including Lucas Blackwood, Ser Perwyn Frey, Robin Flint and Hallis Mollen, to add weight and honor for her to treat with Renly Baratheon.

It was a mission she did not want, but he told her he had no one else to send: her father Hoster Tully is too ill, and her uncle Brynden Tully is needed to hold Riverrun while he marches. She does not like that he is marching but he tells her that he needs to march so it does not look like he is afraid to take the field, and the Lannisters will give nothing if he just sits; it is obvious Lysa will not be coming to support the cause. Catelyn fears he will march on Harrenhal, but he says not. When he threatens to send Greatjon in her stead, she saw no choise since she knew Greatjon was not suited to treat with Renly.

Before she left to go further south, further away from Bran and Rickon Stark she sees her father Hoster Tully. He does not know her and asks about the children little Cat and sweet Lysa.

They were half a day’s ride from Renly’s camp when Robin Flint sees a watcher on a distant windmill. A mile beyond the mile they are met by Ser Colen of Greenpools with twenty men. When she announces she is an envoy for the Lord of the North, he escorts her to Renly’s camp in Bitterbridge.

Renly’s camp consists of thousands of cookfires, along with siege engines. The golden rose of House Tyrell is everywhere, but Catelyn also sees the sigils of House Florent, House Tarly, House Oakheart, House Crane and House Mullendore. On the other side of the Mander river she can see the standards of House Baratheon, House Caron, House Penrose, and House Estermont. Along with the sigils she knows there are dozens she does not. Renly’s own war banner was immense. Hallis Mollen trots close to ask her if she hears the noise. She listens and hears shouts, screaming, the clash of steel, and cheers. When they ride closer she can see melee in progress beneath the battlement of the small castle; “A tourney” Hallis Mollen declares. Ser Colen asks them to wait so he can present them to the king.

As they wait, Catelyn thinks that it is madness to have tourney in the middle of a war. She can see the lords and ladies in the galley: she can see the handsome Renly looking just like King Robert from years past with his young queen Margaery Tyrell surrounded by a lords and ladies, including Lord Mathis Rowan, Lady Arwyn Oakheart, and Lord Randyll Tarly. She hears Renly call “Loras!” when another man falls on the field. On the field she can see there are only four men left, including Loras Tyrell in his silver mail armed with an axe on a white stallion. Soon he was in a battle with a now shieldless blue knight armed with a Morningstar. Finally the horses crashed to the ground with Loras on the bottom. Ser Loras had to yield. When the winner removes his helmet to reveal to Catelyn how young he is. Renly calls the champion to approach, telling him that he was all that his father claimed, that Renly had seen Ser Loras unhorsed only once or twice. Catelyn asks who the knight is and Ser Colen tells her that it is the woman Brienne of Tarth, daughter to Lord Selwyn the Evenstar. She is often called Brienne the Beauty, but not to her face unless you want to fight her.

As champion, you may ask of me any boon that you desire. If it lies in my power, it is yours.

Your Grace, I ask the honor of a place among your Rainbow Guard. I would be one of your seven, and pledge my life to yours, to go where you go, ride at your side, and keep you safe from all hurt and harm.

Renly agrees, putting the rainbow cloak on Brienne, who was a hand taller than the tall Renly. Brienne continues:

My life for yours, Your Grace. From this day on, I am your shield, I swear it by the old gods and the new.

Ser Colen uses this opportunity to introduce Catelyn as an envoy from Robb Stark, Lord of Winterfell. Catelyn corrects him with King of the North. Renly introduces his queen who welcomes her and expresses sorrow for Catelyn’s loss. Renly promises to bring her Cersei’s head. Brienne demands of Renly that Catelyn be required to kneel, which Catelyn refuses. Some of Renly’s lords bristle, but the king laughs and asks if Robb is going to march against Harrenhal. Catelyn says she is not know as she is not on the war council. Then she is asked about Jaime Lannister who she says is being held prisoner. Renly states that the direwolf is gentler than the lion. Lord Randyll Tarly states that Lord Robb is showing weakness and should have come himself to pledge homage. Catelyn, calling Robb King, states he is fighting a war. Renly tells Lord Randyll Tarly that he is overmatched. Then he orders his steward to arrange for Catelyn’s companions, and give Catelyn use of his pavilion since Lord Caswell gave Renly use of his castle, and that he would dine with him at the feast that night. 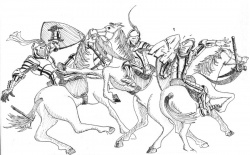 The pavilion is massive, and richly furnished; Catelyn now does not wonder why Renly’s host moves so slowly. Catelyn is accompanied by her lordling companions to the feast in Lord Caswell’s great hall. Catelyn is seated on the dais between Lord Mathis Rowan and Ser Jon Fossoway while Brienne is seated at the far end of the tablein knight’s garments instead of a lady’s. Catelyn notes that her body looks muscular, plain and ungainly, and from her actions she knew it and suffered for it.

Catelyn watches as Lord Willum’s sons Josua Willum and Elyas Willum dipute over who will be first of King's Landing’s, Lord Steffon Varner dandles a serving girl, Guyard Morrigen badly singing about tying lions’ tails in knots, Ser Mark Mullendore feeding his monkey from plate, and Ser Tanton Fossoway climbing on the table and swearing to slay Sandor Clegane. Then there is a fool dressed in gold chasing a dwarf around the tables. Lord Rowan mentions to Catelyn how they are all so young, and Catelyn thinks how true it is, and she thinks that they are still unblooded as Lord Bryce Caron goads Ser Robar Royce into juggling daggers. She tells Lord Rowan that war will make them old as it did them, and she pities them as they are knights of summer and winter is coming. Brienne states:

Catelyn is thinking that winter will come for all of us when King Renly asks her to accompany him.

As they walk, Renly tells Catelyn that the foolish Lannisters gave Ser Barristan Selmy’s cloak to the hound and the Ser Barristan stated he vowed to give his service to the true king. Next Renly tells Catelyn that he went to her husband and offered to give him a hundred swords to take Joffrey into his power, but he refused. Renly states that he felt he had to flee when he did not get the support of her husband since he did not have the strength on his own. They reach the top of the stairwell, and go out onto the roof, where Renly shows Catelyn the campfires that cover the countryside, and asks how many fires burn around Riverrun. Renly tells Catelyn figures that Robb has 40,00 men at most, half of what he has, and Mace Tyrell has another 10,000 in Highgarden; Catelyn knows Robb has lost men in battle and to the harvest. To her issue with Stannis Baratheon being the true heir, Renly replies men respect him, but few love him, and that King Robert also had no real right to the throne—he won is with a war hammer, and this army is Renly’s war hammer. Robb can rule in Winterfell and continue to call himself king, but must bend the knee to him. Now they are interrupted with the news that King Stannis’s host has arrived, although Cortnay Penrose defies him.