A Clash of Kings-Chapter 58 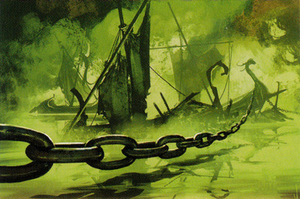 Davos' ship Black Betha is in the second line on the right as Stannis' great fleet, under the command of Ser Imry Florent, enters Blackwater Bay. He sees that the city defenders have few enough ships, but the shore is well fortified, and dozens of catapults and archers line the walls of the city. Davos is glad to know that Stannis sent Melisandre back to Dragonstone, because the king feared the commonfolk would say it was the sorceress who won the battle.

As they pass two winch towers on either side of the headwaters of the channel entering the Blackwater Rush, Davos fears a chain boom, which he sees exists, but it is not raised. The old sailor is curious, but there is little time to consider what it means. Fighting breaks out, and despite his inexperience, Ser Imry's battle plans seem to be working well, until the barge with the wildfire in it explodes. The channel turns into a ruin of hundreds of ships, many burning from the unquenchable green liquid. Davos goes overboard as hundreds of men on both sides die screaming in the green blaze. As the mass of ships and debris begin to float back out towards the bay and Davos hopes he can reach the open sea, he sees the great chain boom raised closing off the Blackwater Rush, turning its mouth into the mouth of hell.