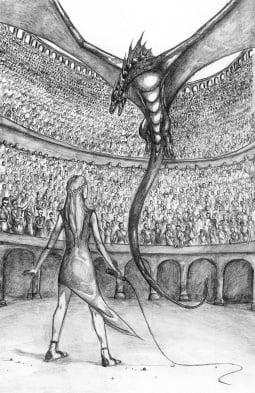 Daenerys bathes in preparation for her visit with her husband to Meereen's fighting pits. Ser Barristan Selmy tells her that the girl Meris, whom they set free, said that the Windblown were willing to join her cause, if Dany gave the Tattered Prince Pentos. Dany cannot agree to pay this as Illyrio is from that city and has helped her more than anyone. Her obligations are to him first.

She then departs with her husband and they arrive at the pits, where Strong Belwas eats a bowl of fried locusts. Hizdahr tells his wife that they are tasty as well, but she declines as Dany is not interested in the spicy food. There are twenty thousand spectators in the pit. As Hizdahr announces the fights, they chant her name, though they use the Ghiscari word for Mother because they cannot pronounce her Westerosi name. Dany thinks to herself that it is not her they love, but the fighting.

The first fight begins with a victory for the Spotted Cat, and there are many more after that. Following them, the first folly of the day begins with two dwarfs jousting, one on a pig, the other on a dog. One dwarf has a shield painted in the colours of House Lannister, which amuses Daenerys. That one falls off the pig and is chased by the other on the dog when Hizdahr tells Dany that they are about to loose the lions. She tells him this was not in their agreement, that the dwarfs did not consent to this like the other fighters who died did, so she forbids that the lions slaughter the dwarfs.

Up next is a bout between Barsena Blackhair and a boar. The fight goes well until the boar's tusk rips her open from the knee to the crotch. The boar then jumps on her, pulling out her entrails, all to the displeasure of the crowd. Daenerys insists on leaving as she is disgusted and no longer wants any part in this. Strong Belwas becomes sick from his locusts, asking for a drink of milk.

It is then that Drogon appears, his attention drawn by the blood and screams. His fires sear the boar, before he eats it and then Barsena. A man runs to try to kill the dragon, jabbing a spear into Drogon's neck before the dragon kills him. Hizdahr commands the rest of his spearmen to kill the dragon. Drogon roasts two spearmen, breaks the pitmaster in two with a swipe of his tail and tears out the innards of another spearman. As Strong Belwas is puking, Dany runs into the fighting pit in a mad state, hearing footsteps behind her. When she gets close, she fears the dragon does not recognize her and will kill her. As he blows fire at her she rolls under the flames, and she whips him until finally he allows her to mount him. She leaps onto his back, pulling out the spear. As she whips him again, he takes flight, and she tells him to go higher, watching as Meereen grows smaller below.