Daenerys learns to embrace her life in Drogo's khalasar, and stands up to Viserys for the first time. Afterward, when Drogo arrives to have sex with her, she rides him instead of being taken from behind and becomes pregnant. 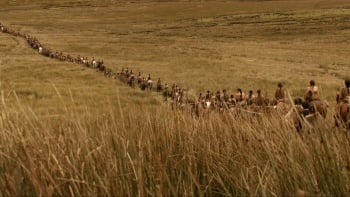 Daenerys looks out for the first time onto the vast, empty, flat plain of the Dothraki Sea with Ser Jorah Mormont beside her. Daenerys sees she has out-distanced the rest of Drogo’s khalasar, who are still climbing the ridge behind her. Among them she can see her brother Viserys struggling with his riding. The sight brings back the memory of Illyrio Mopatis offering to let Viserys stay in Pentos as his guest. Viserys had refused and insisted on coming with the khalasar to ensure that Drogo would give him the army that he promised. Daenerys commands Jorah and the others to wait. Mormont comments that Daenerys is starting to sound like a queen but Daenerys corrects him, calling herself a khaleesi.

As she rides out alone, Daenerys reflects on how the days of the journey have hardened her body. She no longer has open saddle sores nor does she suffer unbearable pain after a day’s ride. At first, Drogo would ignore Daenerys to spend his days talking, drinking, and racing with his bloodriders, leaving her to eat meals alone or with Viserys and Jorah Mormont. Yet every night Drogo would come and ride her from behind. She had been miserable until she had dreamt of a dragon that engulfed her in flame and cleansed her. After that, each day had been easier than the one before it and she had found pleasure in the new sights of the journey, even starting to enjoy sex with Drogo. 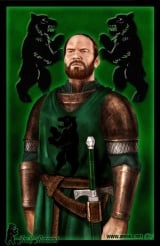 Once she is totally alone, Daenerys decides to dismount and take off her boots so she can feel the earth. Suddenly, Viserys is there, screaming and grabbing her. He is furious that she commanded him to stay on the ridge with the others. For the first time in her life, Daenerys shoves him back. For a moment Viserys is shocked, but then the rage returns and Daenerys sees that he intends to hurt her badly. Before he can, Jhogo’s whip catches Viserys around the neck and pulls him to the ground.

Her handmaiden Irri translates for them as Jhogo asks if Daenerys would like to see Viserys dead or disfigured as punishment for his attack. Daenerys declines, but tells them to take Viserys’ horse and make him walk, an emasculating punishment among the horselords. Viserys, now recovered enough to shout, orders Ser Jorah to kill the Dothraki and discipline Daenerys, but the exiled knight makes the decision to turn to Daenerys and agree that Viserys should walk.

Daenerys is amazed that she hit Viserys and asks Jorah if she has woken the dragon in Viserys. Jorah replies her brother Rhaegar was the last Dragon, while Viserys is less than the shadow of a snake. Daenerys insists that Viserys is still the rightful king, but when Jorah asks if she would want her brother as the king, she realizes that Viserys’ would not be a good king. Even so, Daenerys remains convinced that the people of Westeros are praying for Viserys return until Jorah explains that peasants only pray for rain, health, and a summer that never ends. Daenerys declares that Viserys will never be able to retake the Seven Kingdoms, realizing that she has known this for a long time. Viserys could not lead an army even if her husband gave him one.

Daenerys races her silver ahead of Jorah and the others. It is dusk by the time she returns to the khalasar. Daenerys imagines the laughter in the khalasar when news spreads about Viserys; by the time her brother can return, everyone in the camp will know him as a walker.

As she enters her tent, Daenerys sees a finger of light touch her dragon eggs and, for a moment, she sees scarlet flames before her eyes. When she touches the eggs they feel hot, which she attributes to the sunshine during the day. Daenerys remembers all of the stories about other magical creatures and wonders why there should not also be dragons. Her Dothraki handmaidens, Irri and Jhiqui, tell her that dragons were all killed by men. However, her Lysene handmaiden Doreah, a former sex slave, tells Daenerys a story about a time when there were two moons in the sky, but one came too close to the sun and cracked to release the first dragons. The story ends by claiming that one day the other moon will crack and the dragons will return. The other handmaidens make fun of the story, insisting that the moon is a goddess, not an egg.

Daenerys sends Irri and Jhiqui away but orders Doreah to stay with her for dinner. When Drogo returns, she takes him outside because Dothraki customs say that everything of importance must be done under the open sky. When Drogo tries to take her from behind, Daenerys tells him that she wants to see his face and climbs on top of him. She rides Drogo as fiercely as she has ever ridden her horse and in the moment of his pleasure Drogo calls out her name.

On the far side of the Dothraki Sea, on her 14th name day, Daenerys’ handmaiden Jhiqui brushes her stomach and tells her that she is pregnant.