Catelyn and Ser Rodrik take shelter from the rain at the inn at the crossroads. Soon after, Tyrion Lannister and his party arrive. Tyrion recognizes Catelyn, who had hoped to remain anonymous, and Catelyn takes this opportunity to convince the men in the room to take Tyrion captive so he can face the king’s justice in Winterfell.

Catelyn and Ser Rodrik are on the kingsroad, headed north to Winterfell. It is raining and Ser Rodrik suggests Catelyn should cover her head to keep from taking a chill. Catelyn, however, enjoys the feel of the rain on her face and replies that it is only water. The warm southern rain reminds Catelyn of her childhood with Edmure, Lysa, and Littlefinger at Riverrun. Rains are much less pleasant in the North.

Rodrik states it would be good to have a fire and a warm meal. Catelyn tells him that there is an inn at the crossroads only a short way ahead. Catelyn remembers sleeping there many times when traveling with her father when she was young, when it was run by a fat woman named Masha Heddle. Ser Rodrik reminds her that an inn is too public and that it might be best to find a small holdfast if they do not want to be recognized. However, when they pass unrecognized by a party of soldiers led by Lord Jason Mallister, a bannerman to her father, Catelyn decides they will not be recognized at the inn.

The inn at the crossroads by Marc Simonetti © Fantasy Flight Games

At the inn, they are met by Masha Heddle, who gives them only a cursory look and tells them there are only two rooms available; she gives them none of the smiles or mention of sweet cakes that Catelyn remembers from her girlhood. After changing into dry clothes, Catelyn thinks that from the crossroads they could go west to Riverrun where she could get advice from her father who has been unwell lately. To the east is the Eyrie and her sister; Lysa might be able to provide some answers, but the road across the mountains is too dangerous. Eventually, Catelyn decides that it is best to continue north to Winterfell. Once past the Neck they can get aid from one of the bannermen of House Stark. Then she can tell the bannerman to send riders north to Robb with orders to place a watch on the kingsroad.

Catelyn turns her thoughts to the reliability of Riverrun’s banners. If it comes to war, Catelyn is sure her father will call his banners, but she is not sure they will all come. Robert's Rebellion showed how unreliable the river lords can be, particularly the Freys, who arrived to aid their Tully overlords only after the Battle of the Trident had been won, leaving doubts as to which army they had come to join. Ever since, Catelyn's father has called Lord Walder Frey the “Late Lord Frey". Other banners—such as the Darrys, Rygers, and Mootons—fought for King Aerys II Targaryen. Catelyn decides she must not let a war erupt.

Ser Rodrik comes to escort her to dinner, suggesting they must hurry if they are to eat and calling her the customary “my lady.” Catelyn decides it might be safer to pretend they are father and daughter. Rodrik agrees, but in the process he calls her “my lady” again, and comments on how old ways die hard when he realizes his mistake.

In the long and drafty common room the benches are crowded with a wide variety of people, but Catelyn doesn't see anyone who might recognize her. Ser Rodrik finds them a place by the kitchen where they are accosted by the singer Marillion, who asks about where they come from and where they are going. Catelyn answers the safest of the questions, saying they come from King's Landing. The singer tells them that is his destination for the Tourney of the Hand. The singer is disappointed when Catelyn has not heard about him, and proceeds to attempt to get paid silver for a song. Ser Rodrik, believing that any healthy boy would prefer a sword to a harp, tells him he might have a couple of coppers but would prefer tossing them down a well to hearing the boy’s howling. The singer then tells how he was made to sing for kings and high lords. Catelyn asks if Marillion has ever played for Lord Tully. The singer boasts that a chamber is kept for him at Riverrun and that the young Lord Tully is like a brother. This amuses Catelyn, who knows her brother has hated singers ever since one bedded a girl he liked.

It is then that the door bangs open and the arrival of Tyrion Lannister is announced, with a demand for room and a bath for Tyrion. When Tyrion is told that there are no rooms, he announces that his servants can sleep in the stable, and quips that he needs only a small room. When Masha Heddle repeats that there are no rooms, Tyrion takes a gold coin and flips it into the air. A free rider tells Tyrion he is welcome to take his room, and Tyrion flips the coin to the man. 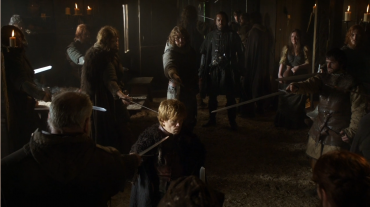 Tyrion declares that he wants some sort of roast fowl and the best wine sent up to his room, and asks the black brother Yoren to join him. Marillion the singer stands and offers to sing to Tyrion of his father’s victory at King's Landing while he dines. Tyrion replies that such a song would surely ruin his supper. He is about to turn away when his eyes find Catelyn, and he comments that he was sorry to have missed her at Winterfell. Everyone in the inn is astonished, and every eye is turned to Catelyn as she stands.

Catelyn decides to play her hand. She asks some of the men-at-arms in the room directly if their lords are true to her father, Lord Hoster Tully. The Brackens, Freys, and Whents are all represented in the room, and all answer with polite agreement. Tyrion is confused and asks what Catelyn is doing, even sniggering at one of the comments. Catelyn then tells the bannermen that Tyrion, while a guest in her home, sent an assassin to murder her son in his bed. In the name of King Robert and the lords they serve, Catelyn calls upon them to seize Tyrion and return him to Winterfell to await the king’s justice.

Catelyn cannot decide which is more satisfying: the sound of a dozen men drawing their swords or the look on Tyrion Lannister’s face.