Arya is surviving on the streets of King's Landing by hunting pigeons. When she hears the summoning bells, she joins the crowd to watch her father confess his treason. Once the confession is done, King Joffrey demands his head. Arya attempts to get to him, but Yoren of the Night's Watch stops her. Afterward, he declares that she is coming with him.

Arya is catching pigeons on the Street of Flour. Compared with catching cats, pigeons are easy. She uses her wooden practice sword to knock one from the air and snaps its neck.

After taking the pigeon, Arya walks by a cart filled with tarts. When she asks for one, she is charged three coppers she doesn’t have. The man also declines to trade for her pigeon. Arya uses the seeing taught by Syrio Forel and decides she could steal one and get away, but the seller guesses her intention and points out the two gold cloaks close by. Even though they are paying her no attention, the sight of the gold cloaks ties Arya's stomach in knots and she lets the man pass.

Arya wants to leave King's Landing, but the seven city gates are either closed completely, open only to entering, or closely guarded by Lannister guardsmen and gold cloaks, who search everything and ask questions. Once she considered swimming the river, but the current is treacherous and she cannot afford a ferry or a ship. Arya imagines that if she can escape to the countryside, she can dig for roots, find orchards, pick berries, and travel north.

There are pot shops in Flea Bottom where she can get her birds cooked or exchanged for some bread or stew, but the people in them seem dangerous. Arya has even been chased a couple of times when leaving, probably for her boots or cloak, but she outran them. She often goes hungry rather than endure the stares of the people in the pot shops. The first night she spent on the street, her silver bracelet and her bundle of good clothes were stolen while she slept. All the thieves left her were the clothes and cloak she was wearing, her practice sword, and her real sword “Needle,” which she was sleeping on.

She misses her brothers. She tried to talk to the other children, but must have talked wrong (likely with a northern accent) because the young ones all ran away and the older ones asked questions, called her names, or tried to steal from her. One girl, twice her age, even knocked her down to try to steal her boots and was rewarded with a smack from Arya's practice sword.

On her daily circuit to check the city gates, Arya decides to go to the riverfront on her way to the Mud Gate to see if she might be able to stow away on a ship. The wharfs are too quiet. On a pier she sees men in the livery of Winterfell guarding a ship. She learns from a passing longshoreman that the ship is called the Wind Witch out of Myr, which is the same ship that her father contracted to take her and Sansa home. As she approaches the ship, Arya suddenly remembers to use the seeing that Syrio taught her again and realizes she does not know the guards. They call to her and she plays the part of a boy trying to sell them the pigeon, knowing they will recognize her if she runs. The ploy works and they send her away dismissively. 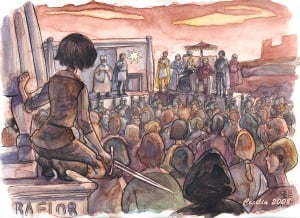 Somehow, Arya finds her way back to Flea Bottom and discovers her pigeon is gone, either stolen or dropped. Then she hears the bells of Baelor's Sept and wonders what it means this time. From one of the passersby she hears that it is a summoning and from another she hears that the gold cloaks are carrying the Hand of the King to the sept.

Arya follows the masses. All around her the townsfolk are discussing her father and the rumors of his treason. She pushes through the crowd and finds herself next to the statue of Baelor the Blessed, the Septon King, and climbs up so she can see. From this vantage point she can see her father supported by two gold cloaks in a rich velvet doublet and a grey cloak, his face drawn with pain and thinner than Arya has ever seen. With him on the pulpit are the High Septon, King Joffrey, Queen Cersei, the Hound, four other members of the Kingsguard, Varys, Littlefinger, and Sansa; Arya wonders why Sansa is there and why she looks so happy.

Then her father makes a speech in which he confesses that he betrayed the trust of King Robert. A stone from the crowd strikes him, causing a gash on his face and more stones follow. The High Septon intones that Blessed Baelor taught mercy along with justice and asks Joffrey for his verdict. Joffrey declares that his mother and his betrothed have requested that Lord Eddard be allowed to take the black. Then he declares that while he is king treason shall never go unpunished, and calls for Ser Ilyn Payne to bring him Eddard’s head. This causes an uproar around Joffrey as the High Septon, Cersei, and even Varys protest the decree. 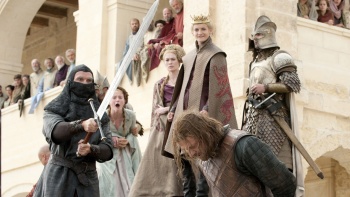 Arya jumps to the ground, drawing Needle, but the crowd quickly engulfs her. She sees Ser Ilyn raise Ice—he has Ice!—and hears Sansa screaming. She continues to fight toward them, using Needle to cut a path. A hand shoots out to grab her and hold her tight, forcing her to drop her sword. The smelly old man who has grabbed her tells her not to look and calls her a boy. Then she hears a soft sighing noise.

Arya looks at the smelly man and recognizes him as Yoren of the Night’s Watch, who talked with her father. He tells her to keep her mouth shut and that she is coming with him. Yoren shakes her hard when she tries to speak. Once the crowd starts to disperse, he hands her back Needle, saying that he hopes she can use it. He keeps calling her a boy and does not give her the opportunity to deny it, insisting that she is trying to say she is not a smart boy.

Yoren shoves her inside a doorway and a blade flashes at Arya’s face; she wrenches back her head but cannot escape because Yoren has a strong grip on her hair.