Bran and Rickon have the same dream about seeing their father in the crypt of Winterfell. Maester Luwin takes Bran down to the crypts to show him his father is not there. They find Rickon already there. They go back to the maester’s turret where Luwin tells them about the coming of the First Men, the treaty with the children of the forest and the coming of the Andals. A raven arrives with news of Lord Eddard’s death.

Bran is watching Ser Rodrik Cassel train the new young recruits in the yard of Winterfell. Maester Luwin is taking measurements of the comet through his lens tube. Bran comments that the recruits do not fight very well, and is told that Lord Eddard took the cream of the guard with him to King's Landing and then Robb took the rest along with all the likely men for leagues around; men are needed to walk the walls of Winterfell. Bran stares resentfully at the boys below, remembering how he knocked Prince Tommen down many times. Then Bran suggests that he could fight from Hodor’s back, but Luwin dismisses the idea as impractical. Bran talks about the blind knight Symeon Star-Eyes, but Luwin insists that that is only a story and that Bran must put his dreams aside.

The mention of dreams reminds Bran of his new dream of the three-eyed crow, a dream that was very sad. He tells Luwin how the crow brought him down to the crypts and his father was there. His father was sad because of Jon. When he woke up, Bran wanted to go down to the crypts to see if his father was there, but Hodor would not take him. Luwin tells Bran that Eddard will be down there someday, but not be for many years. Bran insists the dream was real and that his father was there. In order to dispel the boy’s delusion, Maester Luwin calls for Osha, who tells them that she has lived beyond the Wall, so a hole in the ground will not scare her. Because of Osha’s good behavior, her chains have been removed, but the shackles remain to show she is not totally trusted. She carries Bran in her arms, but he does not mind. 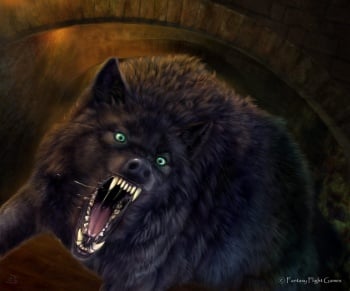 When Maester Luwin sticks his arm into the future tomb of Lord Eddard Stark Shaggydog springs out and savages his arm. - art by Tiziano Baracchi. © Fantasy Flight Games

The vault seems very dark and gloomy. Summer and Osha seem uncomfortable. When Bran states that the men represented by the granite statues were the Kings of Winter, Osha tells him that winter has no king; if he had seen a winter he would know. They proceed down the long corridor, past the statues, but Summer refuses to leave the steps. Bran tells the accomplishments of the different lords and kings: Jon Stark, Rickard Stark, Theon Stark, Brandon the Shipwright, Brandon the Burner, Rodrik Stark, Torrhen Stark, and Cregan Stark. When they get to the end with the statues of Brandon Stark, Lyanna Stark and Lord Rickard Stark, Luwin sticks his arm into the future tomb of Eddard, and Shaggydog springs out and savages Maester Luwin's arm.

Bran calls for Summer, who slams into Shaggydog, knocking the wolf off Luwin. Osha goes to assist Luwin. As the wolves fight, Rickon appears at the mouth of Eddard’s tomb, telling Luwin to leave his father be. When Bran tells Rickon father is not there, Rickon states that he saw him last night, and that he is coming home. Luwin, now looking unsure, tells Rickon that Shaggydog was supposed to be chained. Rickon replies that he does not like to be chained, and Luwin states that he is now the third man Shaggydog has savaged and it will only be a matter of time before he kills someone. Bran calmly states they will wait in Maester Luwin's tower, which Luwin states is quite impossible. Osha replies that Bran is the lord. Rickon agrees to come if Shaggy comes too. Maester Luwin reluctantly follows.

They enter Maester Luwin's cluttered turret, where Osha bandaged the maester's wound, following his instructions. Luwin tries to explain to the boys about the logic of them both dreaming the same dream. He says that Rickon is too young to understand, to which Rickon states that he is four. Then he tells Bran that he is old enough to know that dreams are just dreams. Osha adds in that some dreams are just dreams and some are not; the children of the forest could teach him something about dreams.

Bran starts to go into the stories that Old Nan told about the children of the forest: they knew the songs of the trees, flew like birds, swam like fish, talked to animals, and made beautiful music. The maester says that a man who trusts in spells duels with a glass sword. Luwin takes out several arrowheads made of dragonglass, or obsidian, which the children of the forest forged. He tells them that the children used shirts of woven leaves and greaves of bark in place of armor and carried blades of obsidian; Osha comments that they still do. Bran and Rickon each take some arrowheads.

'The children lived during the Dawn Age, before the coming of men in the land now called the Seven Kingdoms. They lived in the depths of the woods, in caves and crannogs and secret tree towns. Their wise men were called greenseers and carved the faces in the weirwoods to watch over the forest. No one knows how long they reigned or where they came from.' Twelve thousand years ago, the First Men crossed the Broken Arm of Dorne before it was broken. The First Men were mounted, tall of stature, and wielded bronze weapons.

The First Men chopped down the weirwood trees to build holdfasts, and the enraged children of the forest started a war. The greenseers supposedly used dark magic to make the sea rise and break the landmass that is now the broken arm of Dorne. Finally, a truce was called and the leaders of both races met on the Isle of Faces in the Gods Eye. After the Pact was forged, the greenmen formed to keep watch over the Isle of Faces and the First Men eventually adopted the old gods worshiped by the children. The signing of the Pact ended the Dawn Age and began the Age of Heroes. The Pact started 4000 years of friendship between the children and the First Men. While the kingdoms of the First Men endured, so did the Pact, all through the Age of Heroes, the Long Night, and the birth of the Seven Kingdoms.

Eventually the Andal invaders came with steel, fire, and the seven-pointed star of the new gods. The war lasted for hundreds of years, and the Andals burned most of the weirwoods remaining in the south, slaughtering the children where they found them. The children fled north. During the story, Osha adds that there are still children north of the Wall, and also giants, and other old races; Maester Luwin is not happy with Osha filling the two boys with folly.

Luwin’s tale is cut off when the two direwolves start howling. Now Bran is sure that he knew it. The direwolves quiet and a bloodied messenger raven appears. Even Maester Luwin is not sure he wants to know what is in the message. Bran, hugging Rickon hard, asks about the message and Osha tells him he knows, while putting a hand gently on his head. Maester Luwin reads the message and tears up as he tells them that they will need to find a stone carver that knew their father’s likeness well.