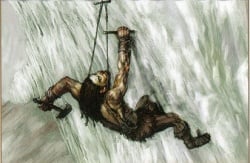 Jon is watching as Jarl’s men are competing with the Magnar’s to see who will reach the top of the Wall first. Many of the climbers fall to their death, including Jarl, but several eventually reach the top. As long rope ladders are dropped down to the base to allow the others to climb, Jon notices Ygritte with tears in her eyes. She tells him that they never found the Horn of Joramun, which would have helped them bring the Wall down without a fight.