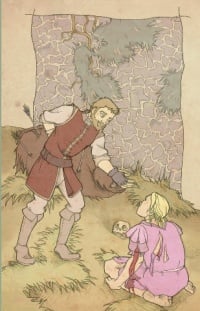 I only rescue maidens - by mustamirri ©

Roose Bolton has left Harrenhal to the Goat, but before marching for the Twins he told Jaime to give his warm regards to his father. Jaime responds, "So long as you give mine to Robb Stark."

Jaime is now traveling for King's Landing under the protection of Steelshanks Walton and a host of Dreadfort men. Qyburn tells him that Lord Selwyn has promised Vargo Hoat 300 gold dragons for the safe return of his daughter, but the goat wants more as he still believes there are sapphires in Evenfall Hall.

One night, Jaime has a bizarre fever dream that he and Brienne are trapped in the dank caverns beneath Casterly Rock. He sees the shades of the other knights of the Kingsguard as well as Prince Rhaegar, come to judge him for killing Aerys. After the fire of his sword goes out, Brienne’s continues to burn, defending him from the shades.

When Jaime awakens, he commands Walton to return to Harrenhal saying that he "forgot something". Back at Harrenhal, the goat’s men open the gates, and Jaime finds that Brienne has been tossed into the bear pit with only a tourney sword.

Vargo Hoat, with a bandage around his face from where Brienne bit off his ear, will not pull the woman up. Jaime jumps into the pit to save Brienne, and holds off the bear long enough for Walton’s men to fill it with quarrels. The Mummers are unable to stop them because Steelshanks' escort of 200 men outnumbers them two to one.

Vargo asks Jaime to tell his father that he had been merciful, and the Kingslayer promises that the goat will receive his ransom. When Brienne asks him why he came back, Jaime responds that he had dreamed of her.