Aegon Frey, called Jinglebell, is the lackwit son of Ser Stevron Frey and Jeyne Lydden, and the fool of the Twins.[4]

Aegon is about fifty, thin and stooped. He has long grey hair. He strongly resembles his grandfather, Lord Walder Frey, but has larger and friendlier eyes.[5] Aegon is a simple and harmless lackwit with a vacant expression.[5] 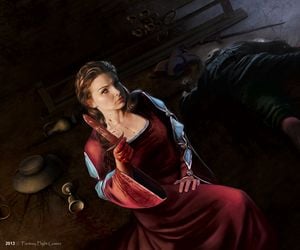 When Robb Stark, King of the Trident, comes to the Twins to apologize for breaking his marriage vows, Lord Walder Frey has Jinglebell present when he receives Robb. The king's mother, Catelyn Stark, interprets this as an intentionally insulting breach of courtesy. Regardless, Robb compliments the bravery of Aegon's late father, Ser Stevron. When Walder introduces the women of the Twins to Robb, Lady Joyeuse Erenford restrains Aegon from rising as well.[5]

During the wedding feast of Lord Edmure Tully and Roslin Frey, Aegon prances to "Alysanne", and he covers his ears when the Greatjon sings "The Bear and the Maiden Fair" while musicians play "Flowers of Spring".[3] He sucks wine from his fingers, hops about during the bedding ceremony, and steals food from the plates of guests.[3]

After the killing begins in the Red Wedding, Aegon hides under a table. Catelyn seizes Jinglebell, however, and threatens to kill him if Walder does not release Robb, who has been struck by arrows. Walder replies that he would readily trade a half-wit grandson for a son. After Robb is stabbed by Lord Roose Bolton, Catelyn saws through Aegon's throat, killing him.[3] Ser Raymund Frey then slits Catelyn's throat.[8]