Difference between revisions of "Aemon Targaryen (son of Maekar I)"

Aemon, born Aemon Targaryen, is the third son of King Maekar I Targaryen. He has served as a maester to the Night's Watch at Castle Black for so long that the rest of the Seven Kingdoms has forgotten about his Targaryen blood. In the television series Game of Thrones he is portrayed by Peter Vaughan.

An ancient man of a hundred years old at the beginning of A Song of Ice and Fire, Aemon is bald, wrinkled, shrunken, and blind.[3] He speaks softly but his counsel is so valued and respected that many fall silent to hear it. Despite his age his mind is still sharp as is his hearing. Aemon is a wise, humble and capable man.

Aemon Targaryen was the second of his name, and the third son of Maekar I Targaryen. He was named after his great-great-uncle, Prince Aemon the Dragonknight, by his grandfather, Daeron II Targaryen.[4] At this time, King Daeron II had four grown sons, three with sons of their own, and so felt that having too many potential Targaryen heirs was dangerous and sent Aemon to the Citadel[5] around the age of 9 or 10.[6]

Aemon forged his chain, and earned the title of Maester Aemon, finishing his studies at the age of 19.[1] He served an unidentified lord until his father, now King Maekar I, summoned him to court to serve the Iron Throne. Not wanting to sit on the small council as he felt that would displace the Grand Maester, Aemon chose instead to serve at Dragonstone, the seat of his eldest brother, Prince Daeron, until Daeron died of the pox.[1] After Daeron's death, Maester Aemon became a maester at the Citadel. He was summoned to court for the Great Council of 233 AC, where some wanted to offer him the crown. Aemon quietly refused, however, ceding rule to his younger brother, Aegon V.[7] Rhaelle, Aegon's young daughter, referred to Aemon as "Uncle Maester".[8] 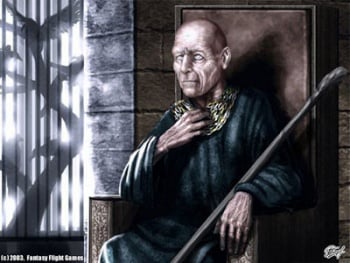 Aemon then chose to go to the Wall to take the vows of the Night's Watch for fear that he may be used in a plot to usurp his brother. On his journey King Aegon provided him with an "honor guard" (emptying the dungeons) to take the vows of the Night's Watch with him. Among them was Brynden Rivers, who later went on to become Lord Commander of the Watch. Ser Duncan the Tall accompanied them aboard the Golden Dragon on the way to Eastwatch-by-the-Sea.[9]

Rhaegar Targaryen sometimes corresponded with his ancient great-great uncle via raven messages. Aemon claims that every man who has ever joined the Watch has been tested on keeping his vows at least once. Aemon stated that he was tested three times, and that the hardest time for him was hearing about the destruction of House Targaryen during the War of the Usurper.[4] 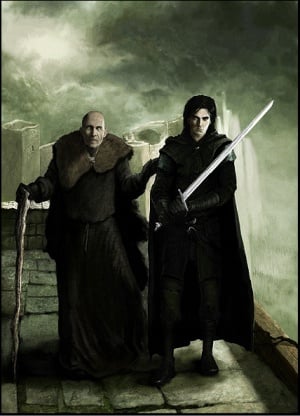 Maester Aemon and Jon Snow on the Wall - by Marc Simonetti ©

Maester Aemon is present at the feast when the Lord Commander Jeor Mormont welcomes Tyrion Lannister to the Wall. Aemon recognises the intelligence of Tyrion and describes him as "a giant come among us," rendering Tyrion, a dwarf, uncharacteristically speechless.[3]

Aemon aids Jon Snow in helping his friend Samwell Tarly become a steward of the Night's Watch, fearing for the boy's safety if he remains a recruit under the brutal training of Ser Alliser Thorne.[10][11] Aemon counsels Jon Snow when he learns Jon's family is in danger, for he knew Jon was having thoughts of deserting to come to his family's aid, just as Aemon had during Robert's Rebellion.[4]

Aemon, being too old to accompany the ranging, remains at Castle Black. The duty of writing and sending messages falls to Samwell Tarly. Jeor Mormont reveals much of Aemon's history to Jon, including the fact that Aemon could have been king, but refused the crown. Mormont has a very high opinion of Aemon and his abilities, an opinion Jon shares.[6]

When Jon Snow returns to Castle Black, badly wounded by an arrow, Maester Aemon treats his injury; despite being blind, his hands are steady and he treats the wound successfully.[12] Donal Noye and Aemon hear and believe Jon's report of wildlings about to attack. When Donal Noye is killed defending the gates from giants, Aemon tells Jon he must lead the men while Aemon provides guidance to him and the other men of the Wall. Aemon also comes to Jon's defense when Janos Slynt and Ser Alliser Thorne want Jon executed for allegedly breaking his oaths and becoming a wildling.[13] During Stannis's occupation of the Wall, Aemon is dubious of Melisandre's claim that Stannis is Azor Ahai reborn.[14] 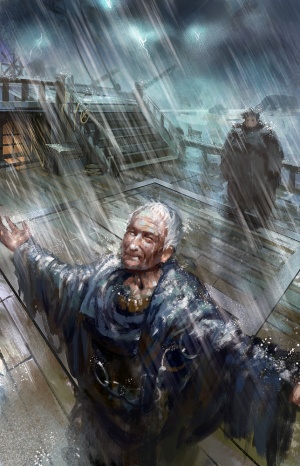 Maester Aemon and Samwell Tarly on the Blackbird - by zippo514 ©

The new Lord Commander Jon Snow sends Aemon to Oldtown with Samwell Tarly and the wildling girl Gilly, carrying Mance Rayder's infant "wildling prince", to remove all "royal blood" from Melisandre's grasp. Jon fears that Melisandre might kill Aemon for his "king's blood" to use in a spell. However, the sea voyage on the Blackbird is hard for the old man and Sam struggles to tell him what to do, leaving him out on the deck, in the rain for too long whilst he is lost in his reminiscences. He is bedridden and near death when arriving at Braavos.

Aemon, upon hearing of Daenerys Targaryen and her dragons, is convinced she is the Prince that was Promised, the Valyrian word translated "dragon" being gender neutral.[8] He curses his age, gutted that he is too old and feeble to seek her out to help with counsel and dragon lore -- a fourth testing of his dual vows. During the voyage from Braavos to Oldtown he dies of a chill at the age of one hundred and two. According to Alleras, a novice at the Citadel, he was the oldest living man in Westeros.

Trying to sleep Jon Snow broods on Master Aemon’s final words to him:

“Allow me to give my lord one last piece of counsel”, the old man had said, “the same council that I once gave my brother when we parted for the last time. He was three-and-thirty when the Great Council chose him to mount the Iron Throne. A man grown with sons of his own, yet in some ways still a boy. Egg had an innocence to him, a sweetness we all loved. Kill the boy within you, I told him the day I took the ship for the Wall. It takes a man to rule. An Aegon, not an Egg. Kill the boy and let the man be born.”

You are half the age that Egg was, and your own burden is a crueler one, I fear. You will have little joy of your command, but I think you have the strength in you to do the things that must be done. Kill the boy, Jon Snow. Winter is almost upon us. Kill the boy and let the man be born.

He was a good man... No. He was a great man. A maester of the Citadel, chained and sworn, and Sworn Brother of the Night's Watch, ever faithful. When he was born they named him for a hero who had died too young, but though he lived a long long time, his own life was no less heroic. No man was wiser, or gentler, or kinder. At the Wall, a dozen lords commander came and went during his years of service, but he was always there to counsel them. He counseled kings as well. He could have been a king himself, but when they offered him the crown he told them they should give it to his younger brother. How many men would do that? He was the blood of the dragon, but now his fire has gone out. He was Aemon Targaryen. And now his watch is ended.

I have been called many things, my lord, but kind is seldom one of them.[3]

Aemon: Jon, did you ever wonder why the men of the Night's Watch take no wives and father no children?


Aemon: So they will not love, for love is the bane of honor, the death of duty.[4]

What is honor compared to a woman's love? What is duty against the feel of a newborn son in your arms ... or the memory of a brothers smile? Wind and words. Wind and words. We are only human, and the gods have fashioned us for love. That is our great glory, and our great tragedy.[4]

I see their shadows on the snow, hear the crack of leathern wings, feel their hot breath.[15]

Knowledge is a weapon, Jon. Arm yourself well before you ride forth to battle.[16]

This page uses content from the English Wikipedia. The original content was at House Targaryen. The list of authors can be seen in the page history of House Targaryen. As with A Wiki of Ice and Fire, the content of Wikipedia is available under the Creative Commons Attribution-ShareAlike License.