Alannys Harlaw is the wife of Lord Balon Greyjoy and sister to Lord Rodrik Harlaw. She had four children with Balon; Rodrik, Maron, Asha and Theon. She is nicknamed "Lanny" by her brother, Lord Rodrik.[2]

Alannys has long white hair and thin skin. Although never a conventional beauty, she once had a strong face and laughing eyes. She has become frail and sickly,[2] however, with a troubling cough.[3]

Alannys has lost much of her mental faculties, frequently forgetting that her sons Rodrik and Maron have died.[2] 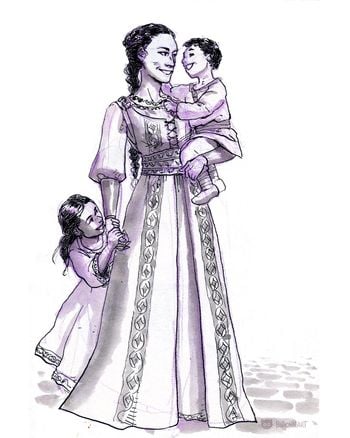 Young Alannys Harlaw with her children Theon and Asha Greyjoy, by Bidonicart©

During her husband's rebellion, Alannys was briefly the Queen of the Iron Islands. Her eldest two sons, Rodrik and Maron, were killed during the rebellion, however, and her youngest son, Theon, was taken by Lord Eddard Stark as a hostage. After the war, Alannys brought five boys, including Tristifer Botley, to Pyke to foster.[2]

As time passed, Alannys began to roam the halls of Pyke in search of her lost sons, even walking the rope bridge to the Sea Tower while barefoot.[2] She eventually moved to Ten Towers to live with her sister, Gwynesse Harlaw, as Harlaw is less raw than Pyke.[3] 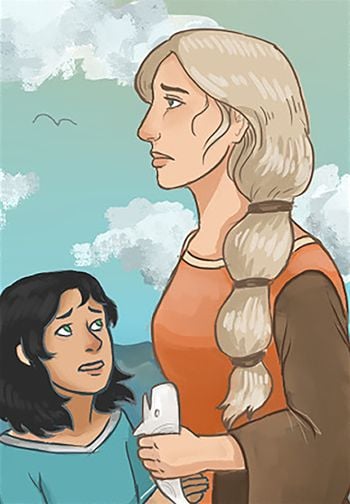 When Theon Greyjoy returns home, his mother is on Harlaw and not expected to return to Pyke due to her poor health.[4]

Alannys's husband, Lord Balon Greyjoy, declares himself King of the Isles and the North.[5] After the capture of Winterfell, Asha Greyjoy advises Theon to return to Deepwood Motte for their mother's sake, but he refuses.[6]

Alannys is widowed after Balon falls to his death from Pyke.[7]

Alannys lives in the Widow's Tower at Ten Towers, the castle of her brother, Lord Rodrik Harlaw. Asha visits Alannys before her departure for Deepwood Motte. Her brother Rodrik feels that Alannys is beginning to recover on Harlaw, though she is still frail, but Asha thinks that Alannys is a shadow of her former self. Alannys is convinced that her husband Balon was murdered. She also gives her consent to Tristifer Botley for him to marry Asha.[2]

Alannys: Did you bring my baby boy?
Asha: Theon could not come. Father sent him reaving along the Stony Shore.[2]

The cold winds have worn her away.[4]

Asha: How is she?
Rodrik: Stronger. She may yet outlive us all. She will certainly outlive you, if you persist in this folly. She eats more than she did when she first came here, and oft sleeps through the night.[2]