Ser Amory Lorch is a knight of House Lorch and bannerman of House Lannister.[5] In the television adaptation Game of Thrones he is portrayed by Fintan McKeown.

The knight is regarded as a cruel and unintelligent, brutal man.[7] He is the sort of man to order the deaths of non-combatants as if it bores him.[5]

Amory's breastplate is decorated with ornate scrollwork,[5] and a manticore is depicted on his shield.[6][8] His warhorse is armored.[5]

According to a semi-canon source,[9] during the Reyne-Tarbeck rebellion in 261 AC, Ser Amory threw the last Lord Tarbeck, a three-year-old boy, down a well in Tarbeck Hall. It is disputed whether this was done per the orders of Ser Tywin Lannister, or without his knowledge.

In 283 AC, Amory was responsible for the murder of the three-year old Princess Rhaenys Targaryen during the Sack of King's Landing. Per the order of Tywin Lannister, he and Gregor Clegane scaled the walls of Maegor's Holdfast to access the royal apartments.[10] Alongside and in front of several House Lannister men-at-arms,[11] he dragged the screaming toddler from under her father Rhaegar's bed, and stabbed her dozens of times.[7] 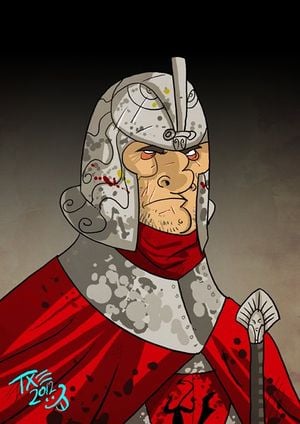 Amory by The Mico

At the onset of the War of the Five Kings in 299 AC, Lord Tywin Lannister orders his brother, Ser Kevan, to direct Ser Amory, along with his fellow bannerman Ser Gregor Clegane and the sellsword Vargo Hoat, to forage the riverlands and to burn what he does not take. Each of the raider captains is to have three hundred cavalry.[12]

At a holdfast in a town by the Gods Eye, Amory's raiding party encounters Yoren's group of recruits for the Night's Watch, with Arya Stark hidden among them. Even though the Watch takes no part in the wars of the Seven Kingdoms, Amory orders his men-at-arms to storm the holdfast,[5] and Yoren is killed in the fight at the holdfast.[13] Because of Yoren's fate, Arya adds Amory's name to the list of people she wants to kill.[14] Amory departs the town without burying any of the dead.[13]

Amory captures two innocent smallfolk, a beekeeper and his wife, and threatens far and wide to hang them if Lord Beric Dondarrion does not surrender to him. When Beric surrenders, Amory hangs the beekeeper and his wife anyway, with Beric strung up in the middle. Beric is later resurrected by Thoros of Myr.[1]

Arya Stark, disguised as a servant in Harrenhal, is offered the deaths of three people by Jaqen H'ghar. She considers Amory for one of them before deciding on Chiswyck.[6]

When Tywin Lannister takes the majority of his army east to engage Stannis Baratheon he makes Amory castellan of Harrenhal, with the Bloody Mummers also left behind to do the foraging.[2] While castellan, Amory resides in the castellan's chambers in Kingspyre, with only a hundred men left to guard the rest of Harrenhal,[4] drinking a great deal of the best wine in the castle's cellars.[15]

Amory is eventually captured by Lord Roose Bolton, after Roose persuades Vargo Hoat to betray House Lannister and to seize control of the castle. After the fall of Harrenhal, Amory is paraded naked before Roose and Vargo. Pleading and sobbing, he is kicked into the bear pit to be killed by the bear inside it. Arya Stark is present to witness Amory's death and notes, "The bear is all in black. Like Yoren."[4] The bear tears Amory apart.[7]

Jaime Lannister finds a human jawbone in the bear pit of Harrenhal. As it still has maggoty flesh on it, it may have been Amory's.[16]

Prince Oberyn Martell comes to King's Landing to seek justice for the deaths of his sister Princess Elia and her children, Princess Rhaenys and Prince Aegon Targaryen, during the Sack of King's Landing.[17] Lord Tywin Lannister tells his son Tyrion his plan to blame all three of the deaths entirely on the deceased Amory (who in truth had only killed Rhaenys), to circumvent giving Ser Gregor Clegane over to Oberyn. According to Tywin, Amory justified his brutal murder of Rhaenys because the screaming child had kicked him. Tywin plans to tell Oberyn that Amory acted on his own, without orders, to gain favor from the new king, Robert I Baratheon, and hopes that Amory's recent brutal death will assuage Oberyn's need for justice.[7]

Later, to spite his father, Tyrion tells Oberyn that Amory Lorch did kill Rhaenys, but also that Gregor Clegane killed Elia and Aegon.[11]

In Sunspear, Doran Martell, Prince of Dorne, tells Ser Arys Oakheart of the Kingsguard that his charge, Princess Myrcella Baratheon, may be in danger. When Arys protests that only a beast would hurt a little girl, Doran reminds him of Amory and Rhaenys.[18]

In Braavos, Arya Stark sees people peacefully welcoming death at the House of Black and White, and recalls how Amory had begged in fear when thrown into the bear pit.[19]

At the Eyrie, Lord Petyr Baelish reminds Sansa Stark about the curse of Harrenhal and of the deaths of all who have held the castle recently, including Amory Lorch.[20]

Ser Roger Hogg tells Jaime Lannister how Amory attacked his towerhouse at Sow's Horn and slaughtered his animals, even though he was sworn to House Hayford, who are sworn to King's Landing.[8]

In Sunspear, Ellaria Sand wishes for the end of the Martell hostilities against House Lannister, as all those who had a hand in the deaths of Elia and her children are dead, including Amory Lorch.[21]

Vargo Hoat had Ser Amory torn apart by a bear after the fall of Harrenhal. That ought to be sufficiently grisly to appease even Oberyn Martell.[7]

I asked him afterward why it had required half a hundred thrusts to kill a girl of … two? Three? He said she'd kicked him and would not stop screaming. If Lorch had half the wits the gods gave a turnip, he would have calmed her with a few sweet words and used a soft silk pillow. The blood was in him.[7]

Only a beast would harm a little girl.[18]