Difference between revisions of "Arakh" 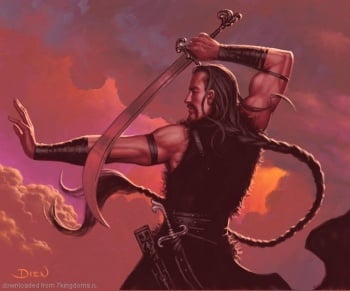 Arakhs can be sharpened with whetsones[2] and rubbed down with red oil.[3] There are a handful of arakhs made of Valyrian steel.[4]

Blades like the arakh are forbidden in Vaes Dothrak.[5] 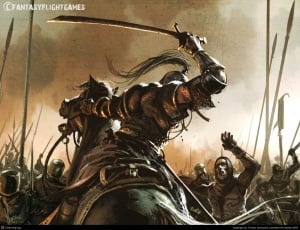 After a Dothraki warrior insults Ser Jorah Mormont for wearing Westerosi armor, the pair fight with longsword and arakh; the knight slays the Dothraki.[6] The khalasars of Khals Drogo and Ogo clash, and Drogo loses a nipple to an arakh slice by one of Ogo's bloodriders.[6] Daenerys asks Mirri Maz Duur to save Drogo's life, but Drogo's bloodriders attempt to halt the maegi's ceremony. Qotho's arakh cuts through Jorah's chainmail to his hip but catches on the knight's bone, allowing Jorah to slay Qotho with his longsword.[7]

After Drogo dies, Daenerys includes his arakh among his possessions on a funeral pyre.[8] Daenerys gives to Rakharo the arakh she had received from Cohollo.[8] Daenerys emerges from the pyre with three hatched dragons, and Jhogo lays his arakh before her in homage.[8]

Zollo, one of the Brave Companions, uses his arakh to chop off the sword hand of Ser Jaime Lannister.[10] Lord Beric Dondarrion kills an arakh-wielding Dothraki during the battle at the burning septry.[11]

Daario Naharis wields an arakh and a Myrish stiletto, the hilts of which are golden naked women.[12] Belwas kills Oznak zo Pahl with his arakh in single combat.[3]

During the siege of Astapor, Caggo strikes down the corpse of Cleon the Great with his black arakh of Valyrian steel.[4]

She heard a shout, saw a shove, and in the blink of an eye the arakhs were out, long razor-sharp blades, half sword and half scythe. A dance of death began as the warriors circled and slashed, leaping toward each other, whirling the blades around their heads, shrieking insults at each clash.[1]

Qotho danced backward, arakh whirling around his head in a shining blur, flickering out like lightning as the knight came on in a rush. Ser Jorah parried as best he could, but the slashes came so fast that it seemed to Dany that Qotho had four arakhs and as many arms.[7]

The fat Dothraki put aside his knife to unsheathe a huge curved arakh, the wickedly sharp scythe-sword the horselords loved.[10]

A slasher's sword, made to deliver deep, slicing cuts from horseback. A murderous blade against half-naked foes, in the pit or on the battlefield. But here at close quarters, the arakh's length would tell against it, and Barristan Selmy was clad in plate and mail.[13] 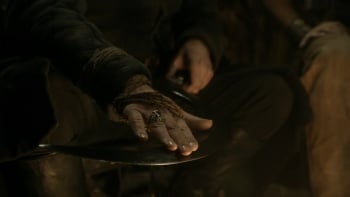 An arakh in Game of Thrones

According to a representative of Valyrian Steel, the arakhs used in the HBO adaptation Game of Thrones are similar to khopeshes. In A Song of Ice and Fire, however, arakhs are more like scimitars.[14]