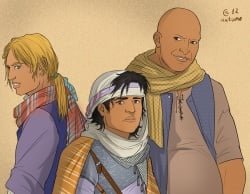 Ser Archibald Yronwood, called Arch[1] and the big man,[1] is a knight from House Yronwood and a nephew to Anders Yronwood, Lord of Yronwood.[4]

Archibald is six-and-a-half-feet tall, broad of shoulder and huge of belly. He has legs like tree trunks, hands the size of hams, and no neck. His arms are thick enough to rival even Strong Belwas.[5] Arch's bald head reminds others of a stone.[1][5]

Arch wields a spiked warhammer,[6] a dagger,[7] and fine armor.[2] He is a better fighter than Quentyn Martell or Gerris Drinkwater,[2] and older than the former.[5] He is aggressive at dicing[2] and easily becomes seasick.[1]

Doran Martell, Prince of Dorne, tells his daughter, Princess Arianne Martell, that her younger brother, Prince Quentyn Martell, has been sent with a small party on a dangerous voyage.[8] 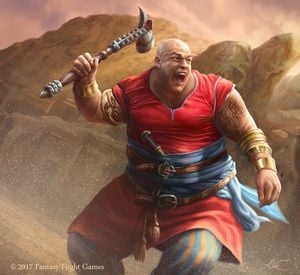 The Dornishmen present themselves to Daenerys in Meereen and the prince reveals their reason to be there, but Daenerys declines Quentyn's offer for marriage since she is about to wed Hizdahr zo Loraq. The queen advises the Dornishmen to return to Dorne but they are determined to stay.[9]

Archibald and Gerris reluctantly help Quentyn in his scheme to take the dragons after Daenerys vanishes from Meereen.[7] Arch wears a bull's mask while disguised as one of the Brazen Beasts, and he uses his warhammer to break a lock deep within the Great Pyramid.[6] When Rhaegal mortally burns Quentyn with dragonflame, Archibald tries to beat the flames with his bare hands but to little success. Both Archibald and Gerris are arrested but neither gives resistance in their grief.[10]

Ser Barristan Selmy, the Hand of the Queen, visits the Dornishmen in their prison cells and tells them that they are to be hanged for treason. Gerris blames everything that has happened on Daenerys but Arch manages to calm him down. The big man tells Barristan what happened when they tried to capture the dragons and also that Quentyn promised Pentos to the Tattered Prince for the Windblown's help in the plan. The old knight sees opportunity and offers the prisoners a ship to Dorne and Quentyn's bones if they deliver a message to the Windblown's leader. Barristan wants the Dornishmen to tell the Tattered Prince that he will be given Pentos if he helps in freeing the Meereenese prisoners held by the Yunkai'i. Gerris is reluctant, but Archibald accepts and convinces his younger companion to go along this plan.[10]

Daenerys: Greenguts is a queer sort of name.
Archibald: A jape, Your Grace. From the ships. I was greensick the whole way from Volantis. Heaving and ... well, I shouldn't say.[5]


Archibald: One kiss from my hammer and no one will care what his name was.[7]
—Gerris Drinkwater, Archibald, and Quentyn Martell


Archibald: Some are. That old King Aegon, the randy one, he built wooden dragons to conquer us. That ended bad, though.[6]
—Archibald and Gerris Drinkwater

The Dornishmen were knights, at least in name, though only Yronwood impressed him as having the true steel. Drinkwater had a pretty face, a glib tongue, and a fine head of hair.[10]