Ser Arys Oakheart is a knight from House Oakheart and a member of the Kingsguard of Robert I Baratheon. Arys is the youngest son of Lady Arwyn Oakheart of Old Oak.[5] He becomes a POV character in A Feast for Crows.

Arys is a handsome man[3] with light-brown hair and a comely face.[6] Sansa Stark considers him courteous and cordial.[6] He is a fine bold knight who serves faithfully as a member of the Kingsguard.[3]

Arys owns a tunic decorated with the golden oak tree of House Oakheart and his Kingsguard armor has white-enameled scales.[6][1] Arys owns at least three white cloaks—light wool, heavy wool, and silk—which he pins with the golden leaf of his house.[6][7]

While all of King Joffrey I Baratheon's Kingsguard knights (with the exception of Sandor Clegane) beat Sansa Stark on his orders, Sansa still regards Arys as one of the kinder knights of them, and prefers that he accompanies her over any of the others. Arys speaks politely with Sansa, and when ordered by Joffrey to hit her, he does so more lightly than the others, and once protested the order before doing so.[6] Arys accompanies Sansa to the tourney on King Joffrey's name day, and expresses to her his confidence in his ability to win, though he admits that the competition is not as fierce as would be desired. Fond of gossip, he informs Sansa of Lord Tywin Lannister's refusal to march his army to King's Landing as Queen Regent Cersei Lannister had commanded.[6]

Arys is sent to Sunspear in Dorne as the sworn shield of Princess Myrcella Baratheon, who is betrothed to Prince Trystane Martell.[9] Arys regrets having struck Sansa, and he lights a candle to the Warrior in gratitude for having been chosen by Tyrion Lannister for the mission.[7] 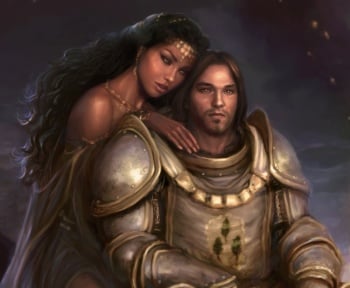 Arys is seduced within half a year of his arrival by Arianne, the daughter and heiress of Doran Martell, Prince of Dorne.[11] She convinces him to rebel against the Iron Throne and support Myrcella's claim over that of her brother, King Tommen I Baratheon,[7] secretly part of an attempt to claim her own birthright.[4] Arys brings Myrcella to Arianne's company of friends, and they travel to the Greenblood, where they are confronted by Prince Doran's guards, as their conspiracy has been uncovered. Arys charges into the Martell forces, killing two of them in the process despite being injured. When his horse goes down, Arys manages to struggle free, but Areo Hotah, Prince Doran's captain of guards, reaches him and kills him with his axe when Arys raises his sword too slowly.[4]

There have always been men who found it easier to speak vows than to keep them.[7]

I will not be remembered as Ser Arys the Unworthy. I will not soil my cloak.[7]