Asha Greyjoy is a member of House Greyjoy and is the daughter of Lord Balon Greyjoy by his wife, Alannys Harlaw. She becomes a POV character in A Feast For Crows. In the television adaptation Game of Thrones she is named Yara Greyjoy to avoid confusion with the wildling Osha and is played by Gemma Whelan.

As a child Asha was a skinny girl with a face full of pimples.[2] The adult Asha is lean and longlegged, with black hair cut short, wind-chafed skin, and strong hands. Theon thinks her nose is too big and too sharp for her thin face, but feels that her smile makes up for it.[3]

Asha is fierce and proud, and defies traditional ironborn gender roles by commanding her own ship, the Black Wind, and leading men into battle.

Asha was fairly unattractive in her youth. Her uncle, Victarion Greyjoy, remembers Asha as a little girl swimming naked in the sea and playing with her doll.[4] After Theon Greyjoy's departure for Winterfell to be Eddard Stark's hostage and ward, Asha became Lord Balon Greyjoy's only remaining child in Pyke. Her mother, Lady Alannys Harlaw, fostered five boys at Pyke after Theon's departure. Tristifer Botley, the boy closest to Asha in age, developed an infatuation with her when they went through puberty, but Asha did not reciprocate his affections.[2]

Asha grew into an attractive and bold young woman, and Balon effectively raised her as his heir. However, Asha preferred Ten Towers, the seat of her uncle Rodrik Harlaw, to Pyke. She lost her virtue at age 16 to a sailor from Lys.[2] In 293 AC or 294 AC Asha sailed the Black Wind on a trading voyage which included stops at Fair Isle, Lannisport, and the Arbor, where she introduced peaches to one of her lovers, Qarl the Maid.[5] 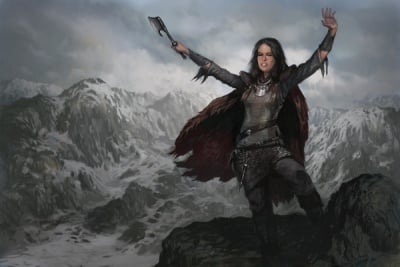 The Kraken's Daughter – by Finer ©

Upon Theon's return, Asha is reported to be on Great Wyk taking messages for her father.[6] Asha passes herself off as Esgred, a shipwright's wife, and flirts with Theon to learn his nature. Theon's naive arrogance amuses her, but Theon grows angry at Asha's deception and her position. At a feast that night, Asha takes the place of honor beside Balon, making Theon feel cheated. When he confronts her again about her deception, she claims that she did in fact have a husband, hefting an axe, as well as a suckling babe, retrieving a dagger from between her breasts.[3]

For her part in Balon's invasion of the North, Asha commands thirty longships and conquers Deepwood Motte.[3] After he takes Winterfell, Theon sends Stygg to request reinforcements from Asha.[7] She visits Theon, but refuses to stay and help him defend the castle.[8] The ten men left by Asha eventually abandon Theon prior to the battle at Winterfell.[9]

Asha returns to the isles after Balon's death to claim the Seastone Chair, bringing with her the captive Lady Sybelle Glover and her children, Gawen and infant Erena Glover. At Ten Towers, Asha informs her uncle, Lord Rodrik Harlaw, that she searched for Theon at Winterfell after it was sacked but was unable to identify him amongst the bodies.[2][4] Most of her support comes from House Harlaw, the house of her mother, Lady Alannys Harlaw, but Asha is also supported by Tristifer Botley (whose marriage proposal she denies), Lord Baelor Blacktyde, Lord Meldred Merlyn, and Harmund Sharp.[10] Rodrik offers to name Asha his heir to Ten Towers, though not to become head of his house. She refuses, desiring instead the throne of her father.[2]

On Old Wyk before the kingsmoot, Asha realizes that she does not have as much support as she had hoped, and offers to back her uncle Victarion Greyjoy if he will make her his Hand of the King. Victarion refuses, as no King of the Isles had ever had one, much less a woman, and he disagrees with her plans to end the war.[4] At the kingsmoot, she challenges the ancient and obese Erik Ironmaker to rise from his chair, his support crumbling when he cannot. When she makes her own claim, her champions are Tris Botley, Ser Harras Harlaw, and Qarl the Maid. With the proposal to make peace and alliance with the north in exchange for Sea Dragon Point and the Stony Shore, Asha achieves a surprising amount of support. The crowd, however, ultimately favors her uncle, Euron Greyjoy. She departs again shortly thereafter, her plans unclear.[11]

While at Ten Towers following the kingsmoot, Asha learns her uncle Euron married her to Erik Ironmaker after she fled Old Wyk, using a seal to represent her at the wedding. Asha curses this but admires Euron's cunning: this move prevents Asha from offering a marriage to another lord and winning his support. She returns to Deepwood Motte with Lady Glover, while her captive's children remain at Ten Towers.[5]

The ironborn at Deepwood Motte dwindle and begin to starve before being overtaken by King Stannis Baratheon's army in an attempt to flee back to their ships.[5] Asha is taken captive and continues with Stannis's host toward Winterfell. A snow storm sets in during their march, however, and the army slows to a halt at a crofters' village approximately three days ride from Winterfell, with few provisions left.[12] Many of Stannis’s men call for Asha to be sacrificed to R'hllor in an attempt to thwart the snows. It is there, freezing and starving, that they are met by Tycho Nestoris of the Iron Bank of Braavos and Theon, escaped from Winterfell. With this meeting, the siblings' roles are reversed, with Theon recognizing Asha and Asha not recognizing Theon.[13]

Asha is distressed when she sees what Ramsay Bolton did to her brother. She is later brought before Stannis while Theon is chained nearby in the room. She tries to offer a ransom for him but Stannis refuses, stating Theon must die for what he did to Eddard Stark's sons or Stannis's northern allies would abandon him. Asha, seeing Stannis will not relent, then urges him to kill Theon by beheading him personally, before a heart tree, as Eddard Stark would have done.

Asha likely makes this suggestion to spare her brother the pain of being burned alive, as Stannis's followers hope to sacrifice him to R'hllor.[14] 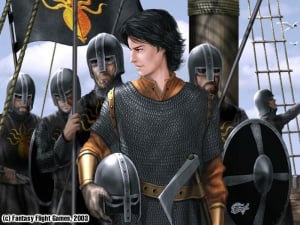 There's my lord husband. And here's my sweet suckling babe.[3]

Theon: What sort of unnatural creature are you?
Asha: Only a shy maid.[3]

If there are rocks to starboard and a storm to port, a wise captain steers a third course.[2]

Tristifer: You and I were meant to be, Asha. I have always known you would be my wife, and the mother of my sons.
Asha: Take your hand away or you won't live long enough to breed a son ... I am your queen, not your wife. Remember that.[2]

The Crow's Eye is a kraken. The elder brother comes before the younger. But I am the child of King Balon's body, so I come before you both.[4]

Peace. Land. Victory. I'll give you Sea Dragon Point and the Stony Shore, black earth and tall trees and stones enough for every younger son to build a hall. We'll have the northmen too ... as friends, to stand with us against the Iron Throne. Your choice is simple. Crown me, for peace and victory. Or crown my uncle, for more war and more defeat. What will you have, ironmen?[11]

- Asha at the kingsmoot

Asha Greyjoy did not intend to be taken alive. She would die as she had lived, with an axe in her hand and a laugh upon her lips.[5]

- thoughts of Asha prior to the retaking of Deepwood Motte

Asha: Your Grace's royal brother was renowned for turning fallen foes into friends. Make me your man.
Stannis: The gods did not make you a man. How can I?[12]

Theon: Sister. See. This time I knew you.

Well, they say Asha's favorite gown is a chainmail hauberk that hangs down past her knees, with boiled leather smallclothes beneath.[3]

- Rodrik Harlaw and Baelor Blacktyde at the kingsmoot