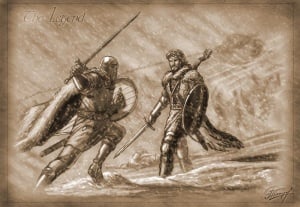 The legend of Bael the Bard is recalled in songs of the free folk. Ygritte learned the song from her mother,[3] and Mance Rayder often sang it at the Shadow Tower after rangings.[4] Bael is not mentioned in the old chronicles at Winterfell,[5] and although Jon Snow learned stories from Maester Luwin and Old Nan and heard of Bael before,[1] he had never heard of the legend before Ygritte's telling of it and because of its many discrepancies is certain that the story is a lie.[3]