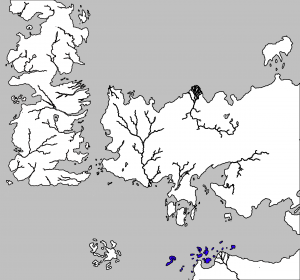 A map showing the location of the Basilisk Isles and Naath in blue.

The Basilisk Isles are a group of islands off the northwestern coast of Sothoryos, on the Summer Sea. They are named after the basilisks that once infested them.[1]

Life on the islands is described as nasty, brutal, and often short. The isles are hot, humid, and swarming with stinging flies, sand fleas, and bloodworms, making them unhealthy for both man and beast.[1]

The Basilisks off the northern coast of Sothoryos, with Naath to the west

Ruins on the Isle of Tears, the Isle of Toads, and Ax Isle indicate the presence of an ancient civilization, now lost, established during the Dawn Age. Maester Yandel speculates the inhabitants of the Isle of Toads may have a link to this vanished people.[1]

The Old Empire of Ghis founded Gorgai on the Isle of Tears. The Valyrian Freehold captured it during the Third Ghiscari War and renamed it Gogossos. The dragonlords used it as a twisted penal colony for the worst criminals.[1]

During the migration of their ten thousand ships, the Rhoynar stopped in the Basilisks for provisions but were attacked by corsair kings of Ax Isle, Talon, and the Howling Mountain, who put two score ships to the torch and carried off hundreds into slavery. The corsairs offered to allow the Rhoynar to settle on the Isle of Toads, provided they gave up their boats and sent each king thirty virgin girls and thirty pretty boys each year as tribute. Princess Nymeria refused and took her fleet to sea again.[3]

Powerful Gogossos fell into ruin after an outbreak of the Red Death during the Century of Blood, and the Basilisks were shunned for a century until corsairs returned. The Qartheen pirate Xandarro Xhore eventually built a black fort at Ax Isle, while the Brotherhood of Bones settled on the Isle of Flies. In the aftermath of the Doom of Valyria, the islands became nests for pirates who attacked merchants attempting to avoid the Valyrian peninsula and Smoking Sea.

Volantis and other Free Cities periodically send fleets to clear out these pirates, with varying success. Saathos Saan of Lys joined the pirates and reigned as King of the Basilisk Isles for three decades.[1] Harwyn Hoare spent two years in the isles as the captive of a pirate king.[4] The author of A Caution for Young Girls claims to have spent time as the plaything of a corsair queen in the isles.[5] Corsairs from the Basilisk Isles captured highborn maidens from Volantis sailing to Westeros to attend King Aegon III Targaryen's Maiden's Day Cattle Show.[6] Racallio Ryndoon fled to the isles after the Daughters' War.[7]

Garin tells Arianne Martell that according to sailors in Planky Town, a new corsair king has risen in the Basilisk Isles and has raided Tall Trees Town.[8]

It is revealed that Missandei and her brothers had been taken from their home in Naath by raiders from the Basilisk Isles and sold into slavery in Astapor. [9]

After returning to Meereen, Daario Naharis tells Daenerys Targaryen that among the turncloaks who have come over to her side is an axeman from the Basilisk Isles, a brute bigger than Strong Belwas.[10]

Among Ser Barristan Selmy's squires is a young former slave called Tumco Lho who is originally from the Basilisk Isles.[11]

Victarion Greyjoy gives Red Ralf Stonehouse the Iron Fleet's swiftest ships to sail the corsair's road along the northern coast of Sothoryos and seek provisions through the iron price from towns in the Basilisk Isles. Victarion gave orders to reunite off the southern tip of the Isle of Cedars; only nine of the ships that had sailed with Ralf turn up, with Ralf himself among the missing.[2]