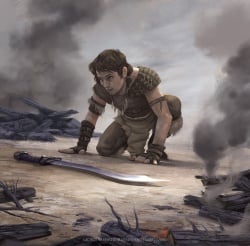 Rakharo pledges to Daenerys as her bloodrider. Art by Victor Garcia

Part guardian, brother and companion, the bloodriders guard and accompany the khal in his daily routine. They share what is his, sometimes even his wives, but never his horse. Sometimes a bloodrider may also be a ko, one of the leaders in charge of the khalasar's component parts. The bloodriders and their khal refer to each other as "blood of my blood".[1]