Borroq is a free folk skinchanger who can inhabit the body of a boar.[1]

Borroq is hulking, black browed, with a flat nose, heavy jowls dark with stubble, and small close-set eyes.[2] Reflecting on an encounter with Borroq in his youth, Varamyr describes him as having looked so much like his boar, that all he lacked were tusks.[1]

Borroq's boar is as large as a bull, covered in coarse black hair, with tusks as long as a man's arm[2] or a sword.[3] 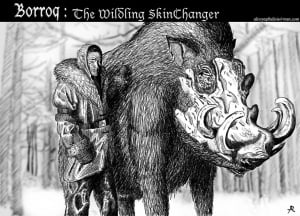 Borroq was one of those present at a meeting of skinchangers that Haggon took Varamyr to in his youth.[1]

Borroq and his boar are amongst Tormund's group which crosses the Wall.[2] Because his boar does not get along with the Ghost, the direwolf of Jon Snow, Borroq takes up residence in an ancient tomb near Castle Black's lichyard, where the boar roots amongst the graves.[3] Jon, the Lord Commander of the Night's Watch, intends to have Borroq eventually accompany Soren Shieldbreaker to Stonedoor. Borroq attends Jon's speech in the Shieldhall.[3]

Borroq: Brother.
Jon: You'd best go on. We are about to close the gate.
Borroq: You do that. You close it good and tight. They're coming, crow.[2]

Jon: But now I find I cannot go to Hardhome. The ranging will be led by Tormund Giantsbane, known to you all. I have promised him as many men as he requires.


Borroq: And where will you be, crow? Hiding here in Castle Black with your white dog?

The company of men long dead seemed to suit him better than that of the living, and his boar seemed happy rooting amongst the graves, well away from other animals.[3]