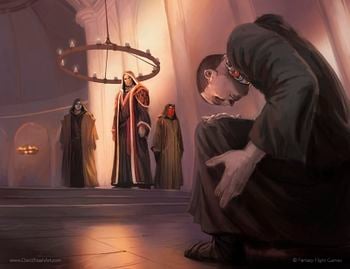 The Conclave by David A. Nash © Fantasy Flight Games 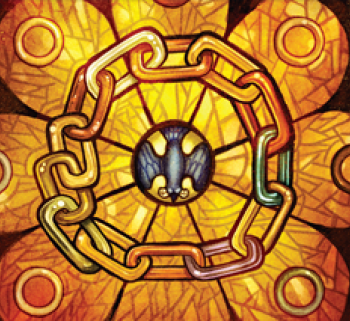 Secrets of the Conclave, by Paolo Puggioni © Fantasy Flight Games

The Conclave is the governing body of the Citadel and the order of maesters. All meetings of the Conclave, which is composed of archmaesters, are confidential in nature and conducted behind closed doors at the Citadel.[1] The Conclave elects the Grand Maester, a member of the small council and an advisor to the King of the Andals, the Rhoynar, and the First Men.[2] After reviewing information from maesters throughout the Seven Kingdoms, the Conclave sends forth white ravens to announce the changing of seasons.[3][4]

Centuries of study convinced the Conclave that the world is a sphere.[5]

In 5 AC, King Aegon I Targaryen asked the Conclave to send an archmaester from Oldtown to King's Landing serve as a royal advisor, and Ollidar thus became the first Grand Maester.[6]

After the High Septon died in 54 AC, King Jaehaerys I Targaryen and Queen Alysanne Targaryen flew on their dragons to Oldtown. Alysanne remained in the city when Jaehaerys visited nearby castles. While feasting in the dining hall of the archmaesters, the queen unsuccessfully advised the Conclave to accept highborn girls into the Citadel.[7] In 60 AC, some believed that Elysar was named Grand Maester to rid the Conclave of his presence.[8] Jaehaerys was feasted by the Conclave in 89 AC.[8]

Tyrion Lannister, the acting Hand of the King, removes Pycelle as Grand Maester. Some archmaesters at the Citadel object, however, and insist that only the Conclave may appoint or remove a Grand Maester. After agreeing with Pycelle's dismissal, the Conclave meets to choose his successor. Although the lowborn Turquin and Erreck are considered, the highborn Gormon is eventually chosen to be next Grand Maester. Lord Varys, the master of whisperers, has spies in Oldtown, however, and he informs Lord Tywin Lannister, the new Hand, of the Conclave's decision. Tywin has Pycelle restored to his positions at the Red Keep.[1]