Ser Daemon Sand, known as the Bastard of Godsgrace, is the bastard son of Ser Ryon Allyrion, the heir of House Allyrion. The knight is one of Dorne's finest swords.[2]

Daemon is handsome, with a strong jaw, sky blue eyes, and light sandy brown hair. He has a close-cropped beard, and dimples appear when he smiles.[2]

Daemon is tall and gallant on horseback.[2]

Daemon is not much older than Princess Arianne Martell.[2] He took her maidenhead when they were both fourteen years old, and their couplings had been both clumsy and ardent. Arianne recalls that it had been sweet.[2] Although her father Doran, Prince of Dorne, eventually learned of this, he did not react to it.[3] Daemon asked Doran for Arianne's hand but was refused,[4] and relations between Daemon and Arianne were not the same after.[2]

Daemon squired for Prince Oberyn Martell[5] and received his knighthood from the Red Viper himself.[2] There are rumors he also became Oberyn's lover, though this is seldom said to his face.[2] 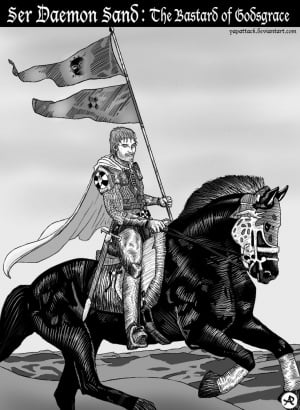 Ser Daemon is part of the nobles and knights that accompany Prince Oberyn Martell to King's Landing to take his place on the small council, as had been negotiated by Oberyn's brother, Doran.[6] When Oberyn champions Tyrion's cause in a trial by combat, Daemon and Lord Dagos Manwoody attend the Red Viper.[7]

After Oberyn's death at the hands of Ser Gregor Clegane, Daemon sends a bird to Nymeria Sand, telling of the fates of her father and the Mountain.[8] When Daemon returns to Dorne, he is swiftly imprisoned by Doran for demanding that the already-imprisoned Sand Snakes be set free.[5]

Doran frees Daemon, Obara, Tyene, and Nymeria Sand. The knight is present at the feast when Ser Balon Swann of the Kingsguard arrives in Sunspear to deliver the Mountain's skull. When Ricasso raises a toast to King Tommen I Baratheon, Daemon declines the toast.[9]

Daemon becomes the sworn shield to Princess Arianne Martell, traveling with her and her companions to Ghost Hill. While sailing across the Sea of Dorne to Cape Wrath, Daemon defeats Arianne in a game of cyvasse.[2] 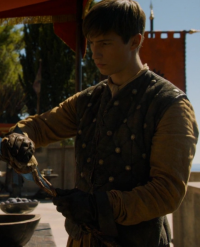 Daemon in Game of Thrones

The man was as smug as he was comely. Of all the knights in Dorne, why did my father chose this one to be my shield? He knows our history.[2]