For the unit of money, see Currency 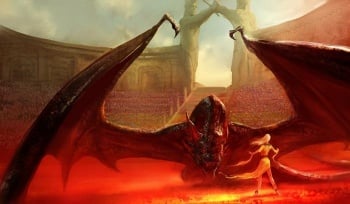 Dragons are magical creatures, which existed on the continents of Westeros and Essos, and up until recently were considered to have been extinct for over one hundred and fifty years. The only remaining traces of the dragons were skeletal remains and dragon eggs which were thought to have turned to stone, until Daenerys Targaryen managed to hatch three of these dragon eggs. 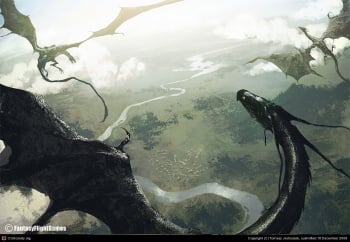 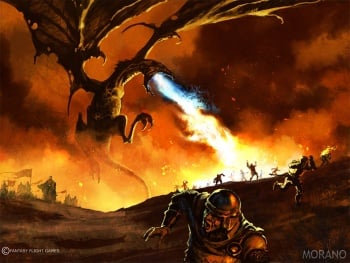 A House Targaryen dragon is unleashed on the battlefield – by Tomasz Jedruszek. © Fantasy Flight Games

Dragons are scaled, reptilian creatures, with two legs and two wings [1]. They use their wings as forelegs like bats, though some A Song of Ice and Fire artwork shows them with four legs and a detached pair of wings. They have sharp teeth and claws, leathery wings and long necks and tails, with spiny crests running down their backs. As hatchlings, they are around the size of a cat, but continue growing and can reach sizes large enough to swallow a mammoth whole. The polished skulls of the Targaryen dragons look like glittering onyx, and their teeth like curved daggers of black diamond. Their bones are black due to their high iron content. Dragonbone is a highly sought after crafting material.[2] 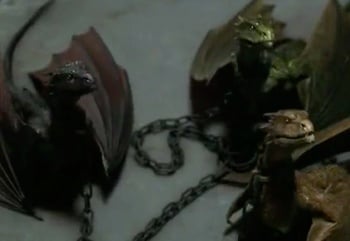 The hatchling dragons, Drogon, Rhaegal and Viserion from the TV Series

Great heat emanates from dragons' bodies, to the point that they steam during cold nights. They breathe extremely hot flame which they use to cook their meat before eating it. [3] Dragons are essentially immune to fire. [4] They are capable of forming strong attachments to humans who raise them. They have a reasonably high level of animal intelligence, and can be trained to serve as battlemounts and receive vocal commands. Dragons are said to be capricious in nature. [5] Dany’s dragons sometimes fight with each other.

Dragons grow throughout their lives, but it is unknown how long they can live or how large they can grow. The largest and oldest Targaryen dragon, Balerion, lived about 200 years and could swallow a mammoth whole, but dragons raised in captivity are thought to be smaller than their wild brethren. [6]

Dragons have no fixed gender differentiation - according to Maester Aemon dragons are “but now one and now the other, as changeable as flame” presumably meaning that they are able to change from one sex to the other and back for whatever reason.

The dragon Syrax is referred to as a she-dragon [7] by Tyrion Lannister and the last Targaryen dragon that died during the reign of King Aegon III, has also been referred to as female, so presumably some dragons can remain a defined or fixed sex. It is not known if there is sexual dimorphism in dragons.

Dragons are believed to be intrinsically tied to magic and the seasons of the world. Since dragons became extinct from Westeros, the power of magic dwindled and winters grew colder.

Tales of ice dragons with cold breath were told in Winterfell by Old Nan. It is undetermined if such dragons are entirely fictional. [10] 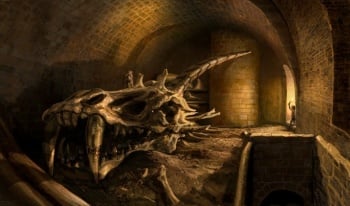 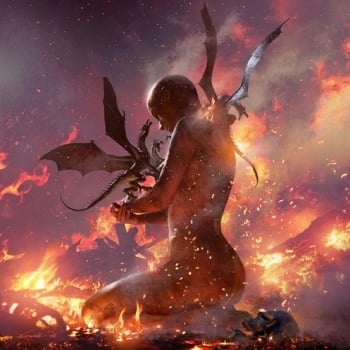 Dragons are native to the continent of Essos. Daenerys recalls hearing that the first dragons had come from the east, from the Shadow Lands beyond Asshai and the islands of the Jade Sea. [11]

Dragons were discovered some five thousand years ago by the Valyrians in the Fourteen Fires, a ring of volcanoes on the Valyrian Peninsula. The Valyrians mastered the art of raising dragons and used them as weapons of war to carve out a massive empire. After the Doom of Valyria, the only dragons known to have survived were the three dragons belonging to the Targaryens, on Dragonstone.

The Targaryens used them to conquer and forge the Seven Kingdoms. Over the course of one hundred and fifty years the Targaryens rode their dragons as symbol of power, King Jaehaerys I, used Jaehaerys took six dragons with him to the North to visit the Warden of the North.[12] They built the Dragonpit in King's Landing to raise and house their dragons and at one time had at least nineteen dragons(the number of dragon skulls stored by the Targaryens in the Red Keep cellars).[2]

Over the centuries, the Targaryen dragons died out, most of them were killed in the Targaryen civil war known as the Dance of the Dragons and in later generations did not grow as large as their parents. It has been suggested by maesters that dragons were meant to be beneath the sky rather than cooped up in cages or cells in the Dragonpit, however massive. Archmaester Marwyn, however, holds the Order of Maesters, and their secret goal to suppress magic was responsible for the extinction of dragons.

The last dragon was a stunted, sick and misshapen thing, and died young during the reign of King Aegon III, the Dragonbane.[13] She had been a green female, small, stunted with withered wings. She laid a clutch of five eggs,[14] which never hatched.[15]

After their extinction, the only remnants of dragons that remained were their skulls and a few petrified eggs. The eggs were highly valuable, both for their beauty and exotic nature as well as their potential to hatch dragons. Many futile attempts were made to hatch dragons from petrified eggs. The Tragedy of Summerhall resulted from Aegon V's attempt. Aegon III, known as the Dragonbane, had nine mages cross the narrow sea to use their magics in attempt to hatch eggs. Baelor I the Blessed took a different approach, praying over eggs in attempt to hatch them. The art of taming and commanding dragons enough to ride is considered lost, aside from a few exceedingly rare books.

Ultimately, Daenerys Targaryen managed to hatch three dragons by sacrificing Mirri Maz Duur in her husband's funeral pyre and stepping into the flames. With Daenerys's exchange of life for life, the first three dragons in over a hundred years were born.

According to legend, a dragon may be tamed by sounding the Dragon Horn.[16] 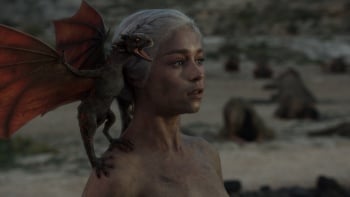 At the time of Aegon's Landing:

During the Dance of the Dragons

During or after the reign of Aegon III Targaryen

Of unknown or uncertain chronology: 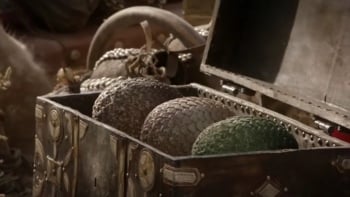 Books and Scrolls about dragons

Once man has seen a dragon in flight, let him stay at home and tend his garden in content, for this wide world has seen no greater wonder. [8]

- Tyrion on the Shy Maid, remembering what someone had written once.

"Death comes out of a dragon's mouth, but death does not go in that way".[19]