Lord Edric Dayne, also known as 'Ned', is the Lord of Starfall and head of House Dayne. He is nephew to the deadliest knight of Aerys’s Kingsguard, Ser Arthur Dayne, the Sword of the Morning, and his sisters, the beautiful Lady Ashara and Lady Allyria, by their elder brother.

At the time of A Storm of Swords, he is twelve years old. He is described as having pale blond hair and dark blue eyes that appear purple. [2]

Edric was wetnursed at Starfall by a woman named Wylla, the alleged mother of Jon Snow. When Edric was seven, his aunt Allyria was betrothed to Lord Beric Dondarrion, with whom Edric went to Blackhaven to serve as a page. At ten, Lord Beric raised him to squire. He once won a prize riding at rings. [1] 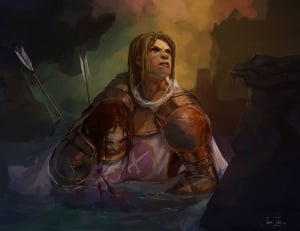 Edric was at the tourney in King’s Landing where he saw Lord Eddard Stark. As Beric Dondarrion's squire, he was part of the force sent by Eddard Stark to the Riverlands to apprehend Ser Gregor Clegane. After they were ambushed at the Battle at the Mummer's Ford, Edric pulled the dying Lord Beric Dondarrion out of the river and stood over the body while the battle raged around them.[1]

Lord Edric continued to squire for Lord Beric, who established the Brotherhood Without Banners and they moved throughout the riverlands, fighting to protect the smallfolk from the war. In his time in the Brotherhood Edric met and befriended Arya Stark, during her time with the Brotherhood, to whom he revealed that he and Jon Snow are milk brothers; that is, they were both nursed by the same woman, Wylla, who had been in service to the Daynes for some years.

Following Beric Dondarrion’s final death, Edric and a part of Beric’s band went their separate way from those who chose to follow the resurrected, vengeful Catelyn Stark and he has not appeared in the series since, his current whereabouts unclear.